As it stands, Gaudí’s creative imagination and extensive influence around Barcelona is almost impossible to escape. His greatest work and exceptional masterpiece, La Sagrada Família, is still being worked on to this day, more than 130 years after construction began in 1882. His easily identifiable modernista style is both beautiful and intriguing, leaving us mesmerised and perplexed.

So what’s it all about? Well, let’s find out shall we? 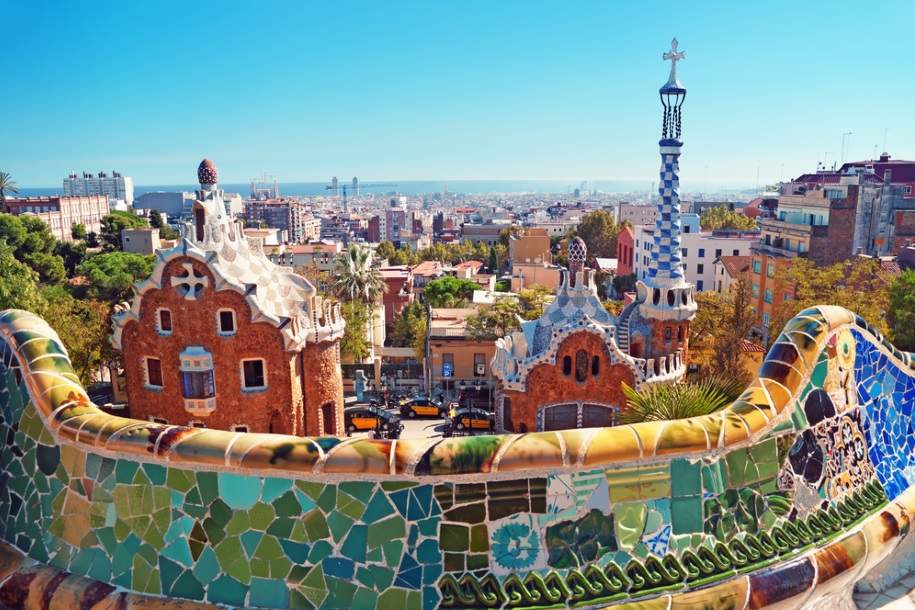 Situated in the north of the city, Park Güell is one of Barcelona’s most-visited and most-iconic attractions. The land was originally owned by Gaudí’s good friend, Eusebi Güell, who commissioned the architect to develop the expansive plot of land with 60 residences, accompanied by a network of walkways, viaducts, steps and local vegetation. However, when development began and the plots of land failed to be sold, planning for the park was abandoned. And when Señor Güell died in 1918, the land was handed over to the city to become a public space.

Even since its days of development, Park Güell held a reputation as a must-see attraction. Today, not much has changed. Gaudí’s love of natural forms is ever-present here and immediately recognised at the park’s main entrance from Carrer d’Olot (shown in photo). Here you can see the house that Gaudí lived in for the last 20 years of his life. The tiled dragon who guards the park now comes in many smaller forms sold around the city and at the top of the entrance’s main staircase is a pavilion originally intended to serve as a marketplace for the aristocracy who would inhabit these grounds. Today it serves as a performance space for the many musicians and artists who show off their skills throughout the day.

Walking through the park it’s easy to see Gaudí’s fluid shapes and colourful designs on display. Tiled benches and rugged columns take on the shape of water, waves and trees amongst other forms of nature. After gazing out from the park’s central plaça to the city below be sure to explore all that this incredible landmark has to offer. There is much to discover on this enormous piece of land!

Learn more about Park Güell by visiting the official site 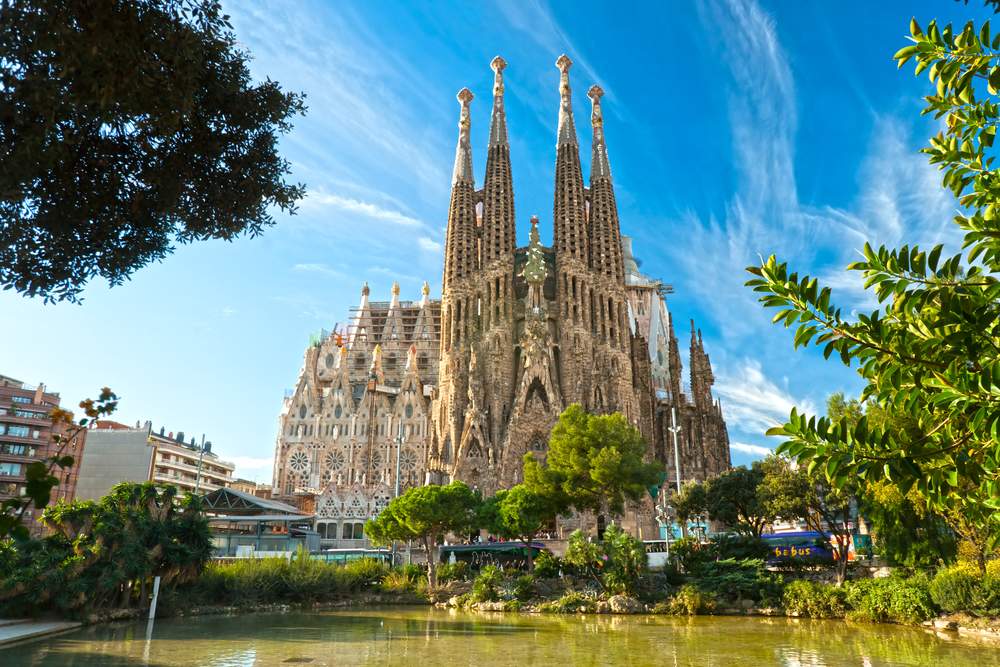 Without doubt Gaudí’s most important work is his yet-to-be-completed masterpiece, La Sagrada Família. It is probably the most unconventional design for a church the world has ever seen and since building began in 1882 it has been both criticised and praised for its unusual appearance. Despite your stance, it is one of Barcelona’s most visited attractions and recognisable features. Its rugged spires are visible from almost any balcony in the city, soaring out from the rest of the city.

Gaudí, being a highly religious man who loved nature, put every drop of thought and symbolism into the building and its interior. Step inside the main hall and one can’t help but feel as if you’re standing in a stone forest of colour and abstract shapes. Its three stone facades respresent biblical scenes of glory, nativity and passion, and once the church is complete, sometime around 2026, it will feature 18 spires in total: 12 for the apostles, four for the evangelists, one for the Virgin Mary and one (the tallest) for Christ himself.

Be sure to visit this one-of-a-kind structure when you’re in Barcelona as the only money funding for this project comes from the entrance fees earned from the three million people who visit annually!

Get your tickets to La Sagrada Família online and avoid the queues! 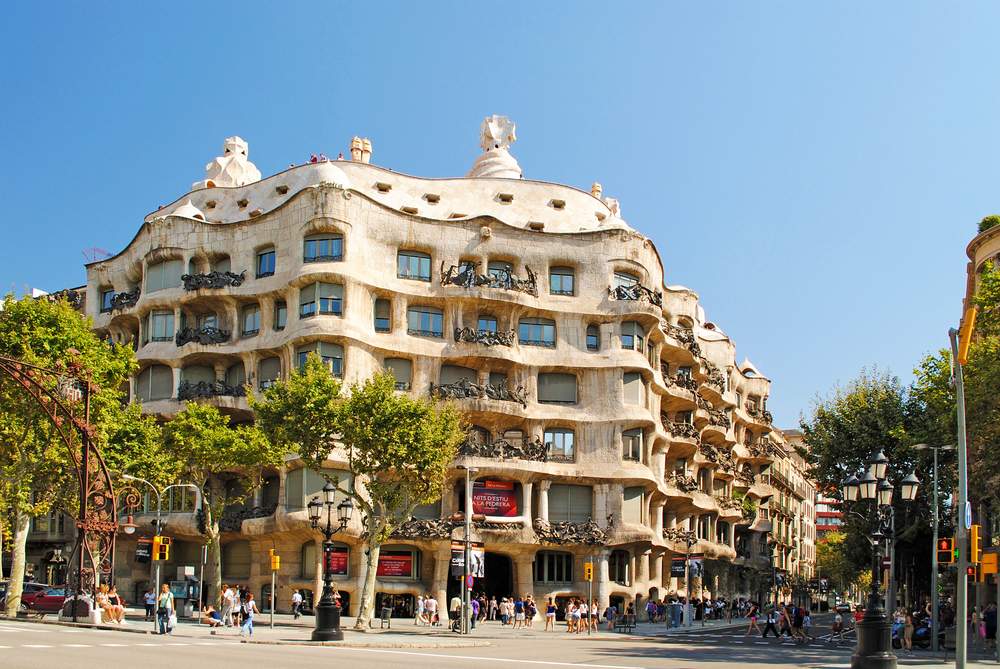 The two most-visited residential complexes that Antoni Gaudí was responsible for can be found just minutes from Plaça de Catalunya. Casa Batlló and Casa Milà (also referred to as “La Pedrera”) are just footsteps away from one another and both are remarkable shows of Gaudí’s unmistakable style.

The larger Casa Milà was commissioned by the Milà family while Gaudí was at the height of his popularity. Its facade is impossible to miss on the corner of Passeig de Gràcia and Carrer de Provença. The curvy exterior is another representation of Gaudí’s fascination with light and was meant to provide different angles to shine and shade in the stong Mediterranean sun. The roof terrace is the other main feature of the property with its famous vents and their soldier-like forms, not to mention the views you’ll take in from this vantage point. 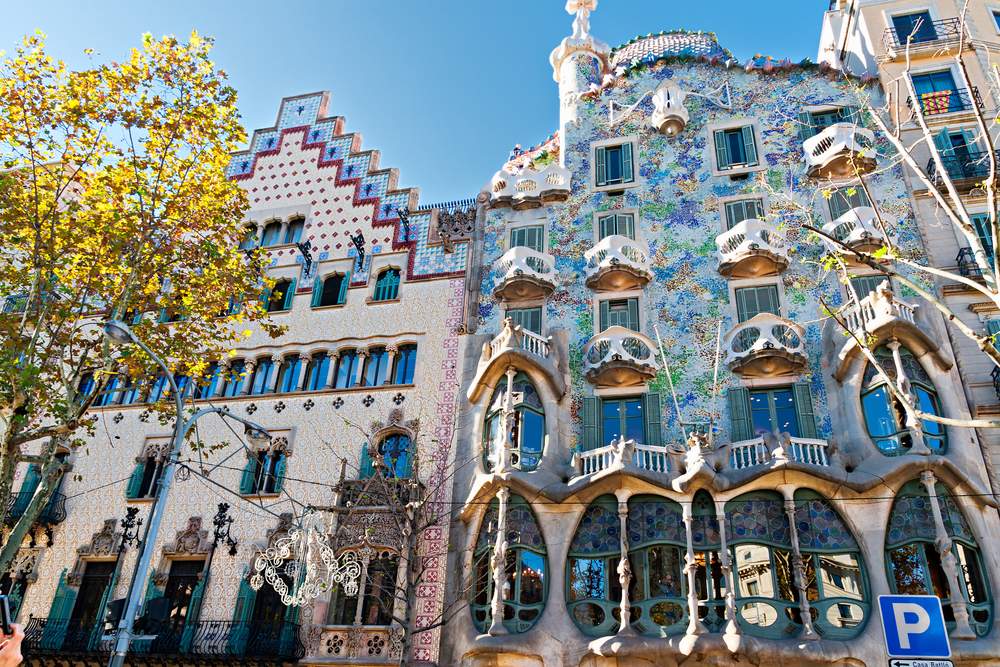 Always one to include nature into his projects, the roof of Casa Batlló is meant to represent the back of a dragon. Its facade is a colourful display of tiles and glass that bear a resemblance to those found at Park Güell. The Batlló family gave Gaudí full creative freedom here, which he used to create a stunning spectacle of colour that can only be fully appreciated by going inside.