Traditionally, we’re supposed to give something up during the 40 days of Lent, however it could be equally as worthwhile to start something – whether it’s a new hobby or just a good deed every day! Why not dedicate your time to exploring other countries and cultures? Here’s what’s happening around the world this spring!

Where better to see in the Lent period than in a city that is watched over by a 38m tall statue of Christ. The Rio de Janeiro Carnival is a spectacle that everyone should experience at least once in their lives. The week-long pre-Lent celebration sees an explosion of glitter and colour in the city, where raucous street parties and unfathomable floats stop traffic, and samba dancers sway their way to the climactic parades, which take place in the purpose-built Sambadrome each night. Make sure you book into one of the outrageous Venetian-style masked balls, popular choices include the Gay Gala and the Black Beads Party.
1- 9 March 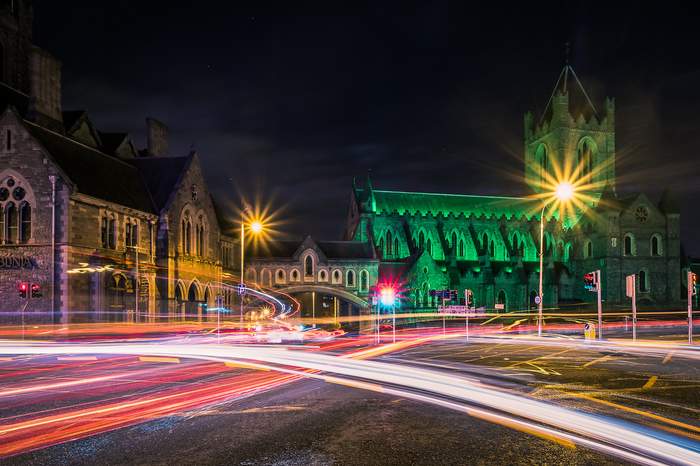 It’s the day when millions of pints of Guinness are guzzled all over the globe in celebration of Ireland’s patron saint, so where better to celebrate than the birthplace of the black stuff and the capital of the nation? Dublin now holds a five-day festival that features a variety of cultural events from supper clubs to exhibitions, plus the city will be illuminated with green lights. The event naturally revolves around drinking, a lot, so keep this in mind before you book any flights. If it sounds up your street though, then pack all the green clothing you own, make like a leprechaun, and get up to some mischief.
14-18 March 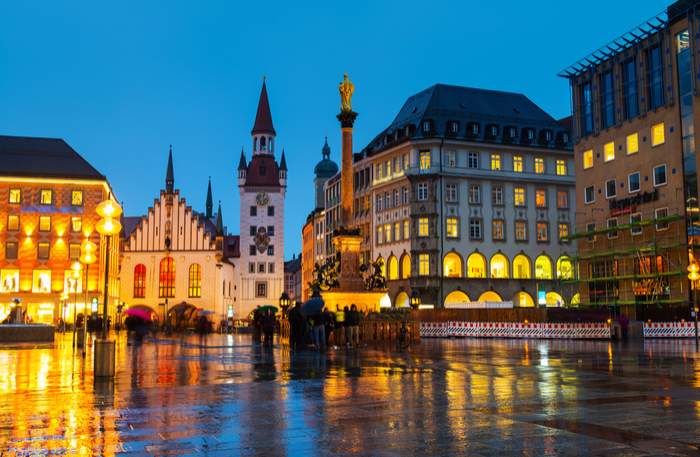 Munich’s Strong Beer Festival has yet to be descended on by the masses like its famous October sibling, making for a much more manageable crowd with whom to enjoy the country’s greatest export and the Bavarian culture. The starkbier that the event celebrates was originally brewed by the Paulaner monks nearly 400 years ago to sustain them through the Lent fasting period – it is nicknamed ‘liquid bread’. The Paulaner Nockherberg brewery still makes the original Salvator beer that the monks created and the brewery’s beer hall is the epicentre of the festival. The ‘strong’ part of its name refers to its flavour as well as its hefty alcohol content: it has a full-bodied, malty taste with nutty, chocolatey notes. The perfect end-of-winter warmer. Prost!
15 March – 17 April 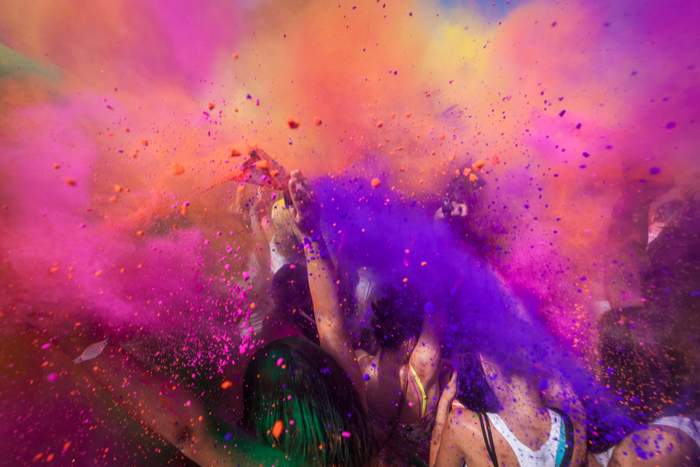 Holi, the celebration of good triumphing over evil, takes place the day after the full moon in March and welcomes the spring season in the most vibrant of fashions. Brightly-coloured powders are thrown around until everyone is covered from head to toe in either red, blue, yellow or green – each representing a different meaning of the Hindu holiday. This tradition of throwing powder is said to be rooted in a myth about the God Krishna, who confided in his mother about feeling jealous of his companion Radha’s pale complexion, in comparison to his own blue skin tone. His mother told him to paint Radha’s face any colour he liked. The throwing of the colours is a wonderful reminder about equality and acceptance, and if you happen to be in India at this time, the experience is will surely stay with you – and your clothing – forever!
20-21 March 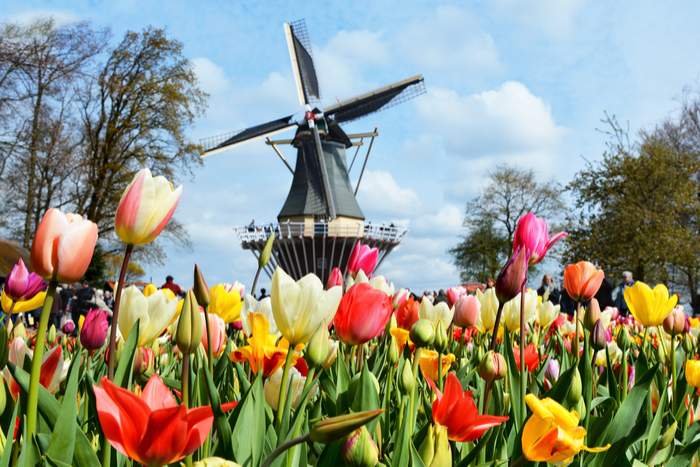 The Netherlands blossoms in the springtime in all senses of the word! On March 21st the Keukenhof flower gardens – nicknamed the Garden of Europe – open to the public in Lisse, near Amsterdam. Here you’ll be astounded by the colours and patterns made up by the blooming bulbs, which include an abundance of the country’s symbolic tulip, of course. The gardens stay open until May, so it might be best to wait a few weeks until the crowds have died down. It could be a wholesome day out to ease a King’s Day hangover, although don’t forget your sunglasses! On the 27th April, the city of Amsterdam is saturated in orange to celebrate King Willem-Alexander’s birthday. People don tangerine garb and take to the streets where there is music, markets and an incredible carnival atmosphere.
Keukenhof, 21 March – 19 May; Koningsdag, 27 April 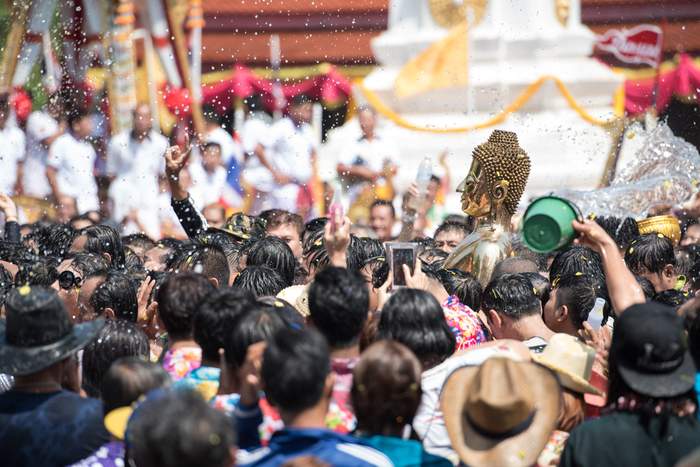 Thailand’s New Year celebrations fall mid-April and are probably some of the most fun to take part in in the world. Traditionally, friends and family splash water onto each other as a symbol of good fortune, but this ritual has snowballed in recent years and evolved into a fully-fledged nationwide water fight. If you’re in somewhere like Bangkok between the 13th and 15th April, you’re going to get wet as soon as you step outside, but at least you’ll be keeping cool – temperatures can reach highs of 35°C at this time of year!
13-15 April 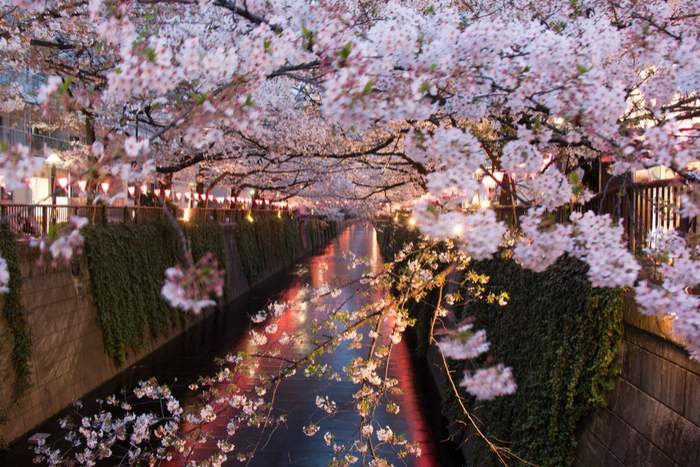 Hanami is one of the season’s hardest to predict events – it is the two-week period when the cherry blossom trees bloom in Japan. People celebrate by sitting and enjoying picnics beneath the trees’ candyfloss clouds, and often drink sake until after the sun goes down. It is also a time of reflection upon the impermanence of beauty and the notion that nothing lasts forever. Check the cherry blossom forecast to find out when and where it’ll be in full bloom. Due to climate change, this year it will be earlier than usual. Yoshino, Kyoto and Toyko are some of the most popular spots to witness the picture-perfect petals.
March – April 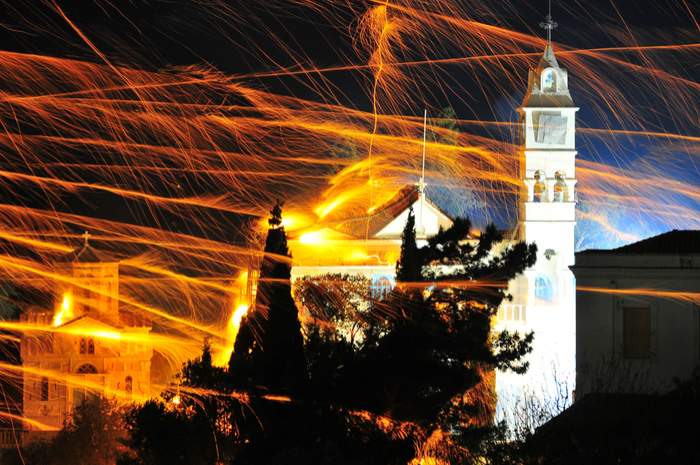 People mark the end of Lent and the beginning of Easter in various ways all over the globe – from Easter egg hunts in the UK to more monumental and folkloric ceremonies such as the Explosion of the Cart in Florence, where fireworks are set off from the top of a traditional cart in front of the Basilica of Santa Maria del Fiore. In a similar vein, but less well-known, is the Rocket War on the Greek island of Chios. In a spectacle of unknown origin, but one that has happened annually for centuries, two rival churches that sit less than half a kilometre apart fire homemade rockets at each other. The night sky is illuminated by glowing copper streaks that looks like shooting stars. The Easter bunny seems a little tame now…
19-21 April