The Luck of the Irish: A Long Weekend in the Emerald Isle

Unaware that the last bank holiday in the UK before Christmas would be something of a scorcher in London, my partner and I decided we’d venture over to the Emerald Isle for a spot of exploration. So, with raincoats in tow, we set sail to cross another destination off our list.

Full disclosure: we hadn’t planned a single thing. Aside from the accommodation and the hire car, we’d somehow neglected any firm arrangements. Although this lack of preparation didn’t affect us too badly, I’d really recommend booking ahead for the top tourist spots such as the Giant’s Causeway and Carrick-a-Rede Rope Bridge.

Being city bods, our airways are, more often than not, clogged with the delights of the Underground. What better way, then, to disperse some of that smog from our lungs than with a walk in the majestic surroundings of Glenariff Forest Park? Although red squirrels were our main motivation for visiting, there’s plenty to see in the 1185-hectare forest, including a series of staggering waterfalls. The aptly named Waterfall Walkway has been open for over 80 years and includes a series of boardwalks and gravel pathways for easy access to these natural wonders. We didn’t see any furry critters unfortunately, but the view from the car park made up for it. 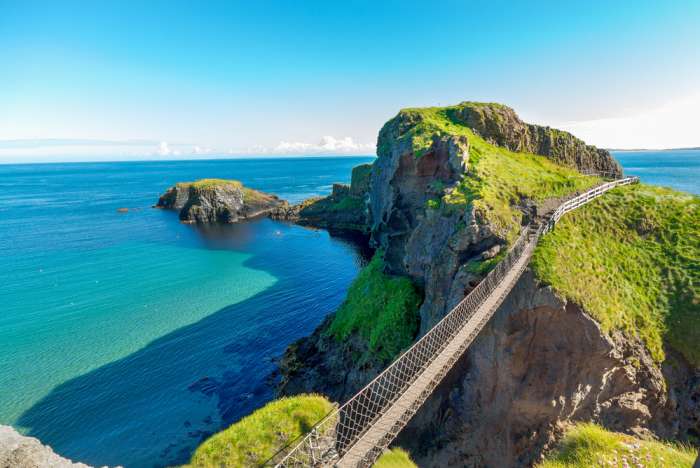 For over 350 years, salmon fishermen built a bridge between the Irish mainland and Carrickarede, a tiny island from which they launched their boats into the ocean. Although salmon fishing does still occur, today the rope bridge is mainly a must-see for tourists to the Causeway Coast. The rope bridge spans 20 metres, with a nerve-jangling 30 metre drop to the clear, turquoise waters below – even the bravest of adventurers will be left a little weak in the knees after a stroll across the swaying walkway. Yes, I am talking about myself.

Today, the rope bridge is owned and maintained by the National Trust. Members can access the crossing for free, but non-members are required to pay a small charge. As we discovered on our arrival at the car park, it’s better to book in advance as the hourly slots fill up pretty quickly in the afternoon, but there’s a tea shop and plenty to marvel at if you need to wait.

Giant’s Causeway is undoubtedly the thing to see if you’re in Northern Ireland. A truly unique natural phenomenon, it has inspired and enthralled many a visitor, and with good reason. The result of an ancient volcanic eruption, the hexagonal columns reach out into the sea beneath a majestic cliff formation known as the Organ.

We had planned to visit the Causeway a day earlier than we actually did, but upon arrival at the National Trust car park, it appeared that pandemonium had broken loose, with cars, coaches and hordes of people cavorting this way and that. The very helpful car park attendant told us that National Trust members could park and access the Causeway for free, but such was the volume of tourists that we decided against visiting at that time.

As luck would have it, on the drive back to Bushmills along the Causeway Road, we spotted a hand-painted sign offering all day parking and access to the Causeway for only £5. The next day, this is where we parked, in a small grassy field managed by two cheerful women. Positioned just at the top of Shepherd’s Steps, we were treated to a fantastic view and, after a brief walk, we were clambering across the stones themselves.

I was worried that the whole thing would be overly commercialised, but I was pleasantly surprised. Although it was busy, the Giant’s Causeway sits alone, away from the National Trust hub, which promotes a feeling of remoteness and unspoilt beauty. It really does feel like a place straight out of Myths & Legends.

‘Tis pleasant, safely to behold, from shore, the rolling ship and hear the tempest roar.’ This is the poetic inscription which anoints the Italian-inspired circular structure that sits perched on the edge of the cliff at Downhill Demesne. Once the library of scandalous Earl-Bishop Frederick Hervey, the domed edifice looks truly impressive when viewed against a backdrop of rolling waves and stormy skies.

Although now in ruins, Downhill House retains a sense of grandiose and makes for an intriguing wander, as do the quaint gardens. The signage states that you may be able to view whales or pods of dolphins from the cliffs on a clear day, but we had no such luck – my quest to see a whale in the wild continues!

If your journey along the Causeway Coast leaves you feeling a little peckish, stop at Ursa Minor Bakehouse Café in Ballycastle for a spot of light refreshment. An independent eatery that’s also a part of the Économusée Project, its weekly-changing menu reflects the availability of fresh produce from local sources for a truly tasty experience. Although we only stopped for a light brunch, I did eye some particularly delightful looking cakes and pastries on the counter. Maybe for next time…

The problem with Northern Ireland? There’s just too much to see in a long weekend! Although we saw as much as possible, there were still some sights that we didn’t have time to visit, such as Rathlin Island, Dunluce Castle or The Gobbins. I guess that just means we have to go back, right?

Has my weekend away piqued your interest? Plan your getaway with us – you can find flights to Belfast here.