Every year, on March 21st, the United Nations highlights the importance of the many types of forests found around the world with the International Day of Forests. Launched in 2008, the day promotes the importance of healthy forests through education and engagement, with the aim of maintaining and extending the leafy pastures we have now for future generations. In this blog, we run down some of the most famous and important forests on the planet, while also throwing in the odd forest fact here and there. 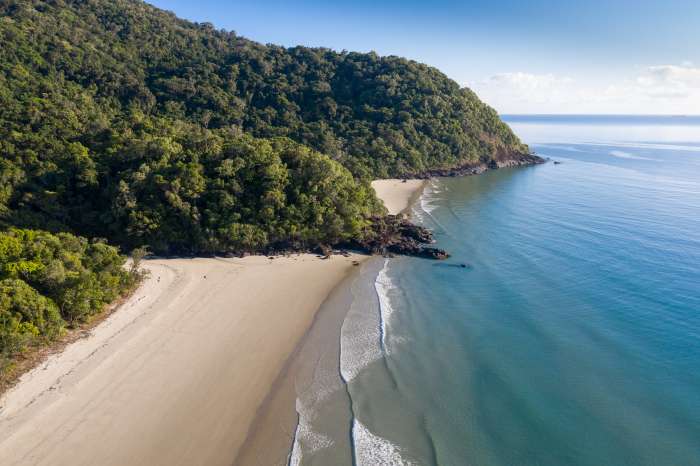 An oldie but a goldie (as they say!), the shoreline forest of Daintree is thought to be the oldest in the world, having been in continual existence for the past 110 million years. Part of the largest swathe of tropical rainforest in Australia, this leafy expanse has one of the most complex and unique ecosystems on Earth – as the forest has been largely unchanged in so many years, species directly descended from the world’s ancient inhabitants still roam between the trees down to the water’s edge. Today, the green bowers are home to over 430 species of birds, ancient floral specimens such as ferns and conifers, and the idiot fruit. Furry friends include tree kangaroos and the common ringtail possum – cue the ‘awhs’!

One third of the Earth’s landmass is covered with forest. 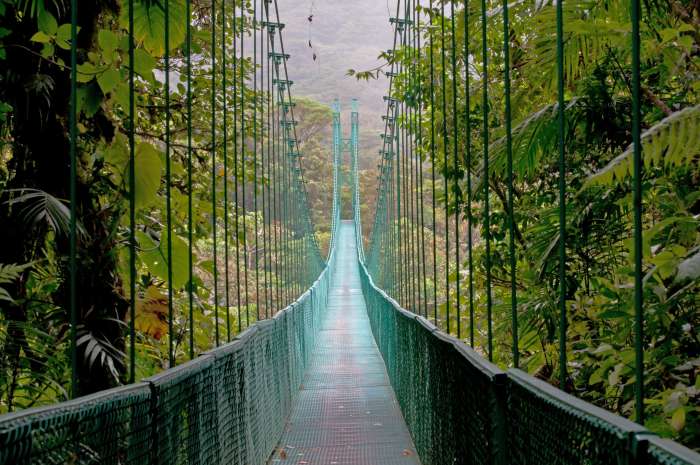 Costa Rica is one of the most diverse countries on Earth, with four per cent of the known species of plants and animals condensed into just 0.04 per cent of the world’s surface. If you’re planning on visiting, best bring your earplugs as the dawn chorus can be pretty raucous! Unfurling in the undulating hills towards the north of the country, the Monteverde Cloud Forest Reserve is home to many of these incredible species, thanks to the huge expanses of virgin forest – it’s no wonder that National Geographic dubbed it ‘the jewel in the crown of cloud forests’. Amongst the verdant foliage, you’ll find 620 species of animals and the largest collection of orchid species in one place – it’s enough to make a millenial houseplant enthusiast weak at the knees. Although the forest has become increasingly popular with tourists, only about three per cent of the area is open to the public to ensure sustainability – with over eight miles of trails to traverse, however, you’re certain to spot something incredible!

Forests are the most diverse ecosystems on the planet – 80 per cent of the world’s animals, plants and insects live there.

Unfortunately, the Harapan Rainforest was heavily logged during the 1970s, with severe repercussions for the native wildlife who called the green expanse their home. Today, it faces an uncertain future, with logging, mining and palm oil industries all eyeing the jungle. There’s also a very real threat from illegal hunters and loggers. However, there’s light at the end of the tunnel, and the jungle has been affectionately nicknamed the ‘Forest of Hope’! In recent years, the rainforest has come under the management of a number of non-governmental, not-for-profit organisations (including the RSPB) under a 95-year license – they’re currently campaigning to plant one million trees in the area to replenish the habitats that have been lost. Why? In this leafy oasis, both the endangered Sumatran tiger and elephant reside, and it’s one of their last strongholds. Similarly, orangutans, Malayan sun bears and clouded leopards also call Harapan Rainforest home. If you want to help with the regeneration of this ancient jungle, you can donate through the RSPB website today. 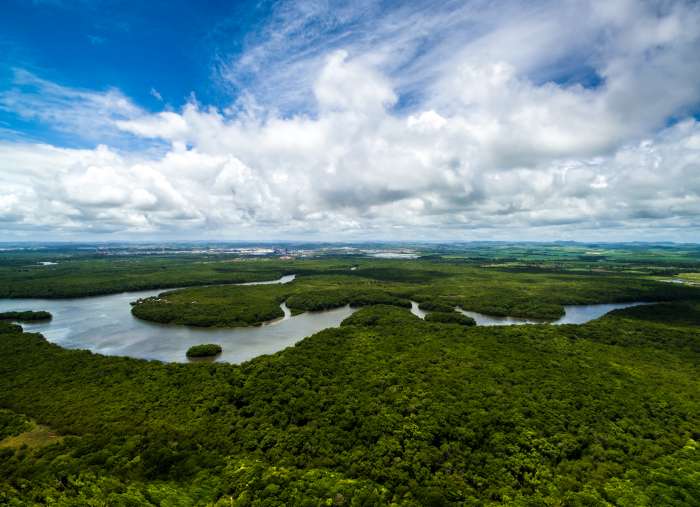 No list of the world’s forests would be complete without the mighty Amazon Rainforest. Representing over half the planet’s remaining rainforest, the jungle is the most biodiverse in the world, with 16,000 species of trees packed into the 2.1 million square miles that the forest covers. At such a size, the Amazon reaches into nine different countries in total! Within this vast number of trees, you’ll find one in 10 of the world’s known species – the largest collection of plant and animal species on the planet. The ‘Lungs of the World’ are in constant danger, however. In 2018, it was estimated that 17 per cent of the Amazon had already been irreparably destroyed, and that was before the 2019 Brazilian forest fires that decimated large swathes of the forest. One of the largest threats comes from pastoral farming and soybean plantations – not only do these practices themselves cause deforestation, but the workers also need homes, and access to and from the sites. In one truly distressing study, it was estimated that the ‘Amazon rainforest could become unsustainable under conditions of [climate change], leading to an almost complete loss of rainforest cover by 2100’. This fact alone highlights the importance of the International Day of Forests and the steps we must take towards sustainability. We didn’t mean to make this an unhappy read, but it’s important to face up to the uncomfortable truths.

20 per cent of the Earth’s oxygen is produced by the Amazon Rainforest. 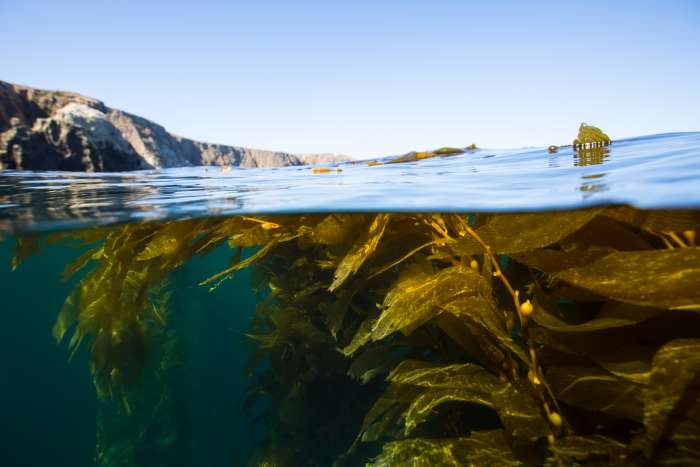 Onto happier stories, and a more unusual forest. That’s right, forests aren’t just the leafy expanses of trees that we immediately imagine – they can also be found underwater, such as the famous kelp forests off the shores of sunny California. Kelp is a type of seaweed, and it’s simply thrived in the waters around the Channel Islands, where both warm and cold currents meet. As a result of the abundant kelp, inhabitants are protected in the intertwining mass, making it a safe environment for the 1000 species that live there. Like other underwater environments around the world, the kelp forests are under threat from ocean acidification and warming sea temperatures, both of which put the unique biodiversity of the marine jungle at risk. Luckily, a state Marine Protected Area was established across 21 per cent of the waters, and the Californian government responds directly to information passed on by the Kelp Forest Monitoring Programme. Educational initiatives have also been established, and the popularity of the jungle with underwater photographers means that images of this unusual forest can be seen across the globe.

12 to 20 per cent of the world’s greenhouse gas emissions are attributed to deforestation. 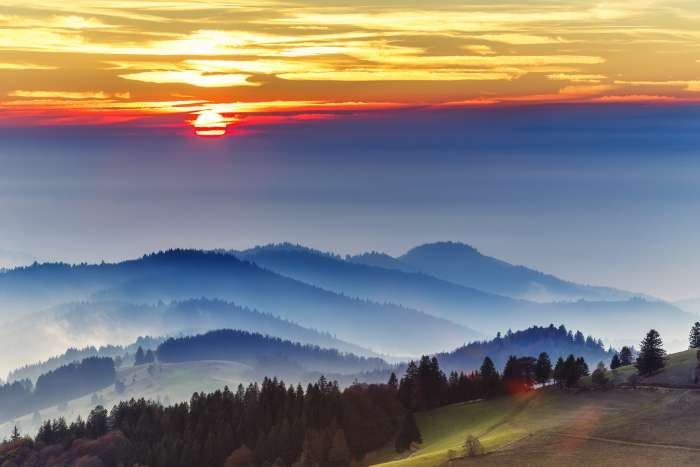 Associated with the creepy tales of the Brothers Grimm and, of course, the rather delicious dessert, the Black Forest in Germany is a vast expanse of wooden mountain ranges. In the past, the area was heavily mined for its ore deposits, but in recent years tourism and education has become the main industry, with thermal spas, watersports, hiking, skiing and paragliding proving popular pastimes. In 2014, the Black Forest National Park was established, protecting the region between Baiersbronn and Baden-Baden, while two smaller parks were created in order to preserve the countryside as a cultural landscape. While the Black Forest may be less diverse than other entries on this list, it’s one of the only places where you can see the rare Black Forest cattle and horse in their natural habitat – you might also spot a bobcat scurrying through the undergrowth, or a bright-eyed beaver making a dam. Don’t forget your binoculars!

13 million hectares of forest are destroyed every year. 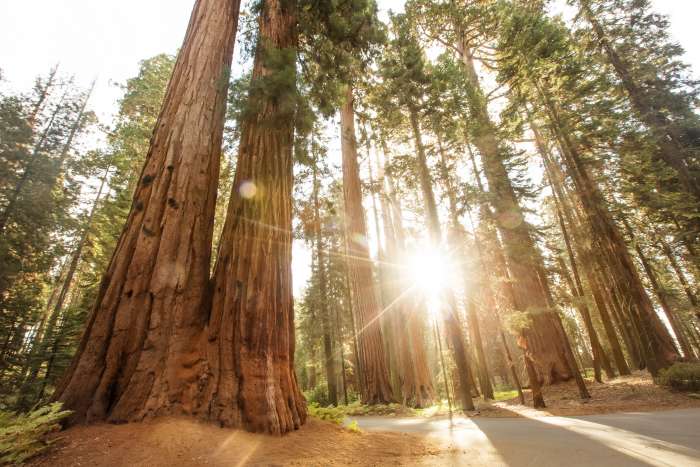 It’s back to California for the final entry on our list of forests. Sat in the shadows of the southern Sierra Nevada mountains, the Sequoia National Park is named after the world’s largest trees – the giant sequoia. The tallest tree surviving in the park today is the impressive General Sherman: standing at almost 84 metres tall and over 31 metres wide, it’s thought that this towering tree weighs about 2100 tonnes! Other trees that make up the biodiversity of the forest include numerous firs and pines, while the locals range from coyotes to black bears and even wolverines (no, not Hugh Jackman, unfortunately…)! Unusually, the forest is threatened by a somewhat strange practise – the illegal cultivation of marijuana! Although there’s no evidence of any trees having been felled, the dangerous activity could easily impact the unique biodiversity of the forest.

Forest growth in the US has exceeded the number of trees felled since the 1940s, and now has more trees than at any time in the past 100 years.

With March 21st only a few days away, now’s the time to consider our individual and global impact on the forests around the world. It may sometimes feel as though our contributions or lifestyle changes don’t make much of a difference, but with the right education and goals for the future, we can preserve these incredible environments for generations to come – you’d better be-leaf it!