Nestled against the English border, the North East of Wales offers visitors a flavour of the magic, mysticism and monumental castles that have made the country so famous. Their flag is emblazoned with a red dragon after all! Although sharing boundaries with England, North East Wales has a very different feel from its neighbouring English counties, making it a popular destination for those in Cheshire, Shropshire, Herefordshire and beyond.

Divided into three counties, North East Wales is home to the historic areas of Denbighshire, Flintshire and Wrexham, which once made up the area known as Clwyd before 1996. Here, we’ll bring you a top highlight from each county so that you can decide if North East Wales is right for your next staycation.

Dear reader, you know us well enough by now to know that we never pass up an opportunity to write about an ancient castle, especially one with dramatic views! That’s why we’ve chosen the ruins of Castell Dinas Brân as our highlight for Denbighshire. 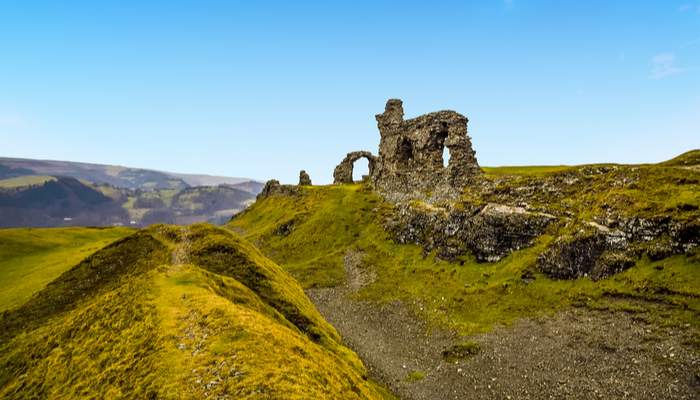 Blessed with a hilltop vantage point, the panoramas of the surrounding countryside include dark forests, precarious scree slopes and glimpses of the River Dee, making it the obvious spot to build a fortification against the English (boo, hiss). It’s thought that a wooden structure of some sort and an Iron Age hillfort stood upon the site of the stone castle previously, with the fortress we see today being built around the 1260s. Much of the history of the castle has been lost in the intervening centuries, but it is known that the fortress was only maintained for around 20 years before it was abandoned (most likely following Welsh/English conflict) and fell into disrepair – despite this, the outline of the walls, the remnants of a tower and the gatehouse can still be easily seen and even touched! 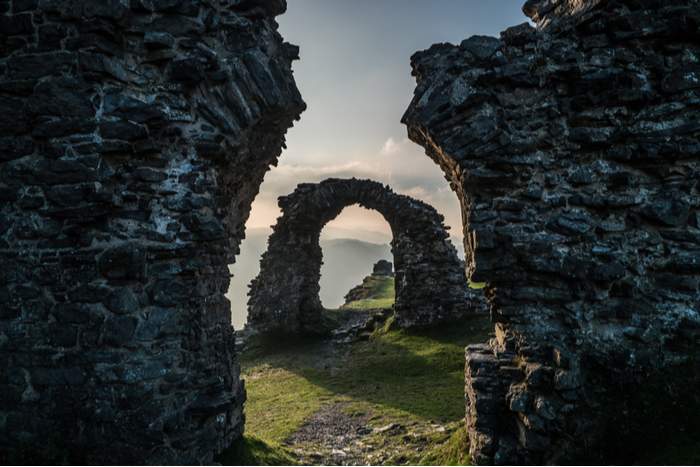 Today, the ruins can be accessed only by those willing to make the hike, so don’t forget to pack your walking boots: one route begins in the nearby town of Llangollen and ascends past several hillside cottages before a zigzag path guides you towards to the flint ruins itself; the other route is shorter but far steeper and even the hardiest of mountain goats will find their thighs aching before they reach the summit. We might be biased, but we think there are few better picnic spots in the whole of Wales!

‘St Winefride’s Well Shrine has welcomed pilgrims and visitors for over 1300 years’ proclaims the tourist information for this ancient spring, making it ‘the oldest continually visited pilgrimage site in Great Britain’ – no mean feat in a country of renowned places of worship and reflection. But who was St Winefride? Well, before her martyrdom, Winefride was a pious and virginal Welsh Christian who rejected the advances of a local prince. Instead of merely accepting her wishes to be left alone, the prince beheaded Winefride (#notallmen #yesallmen) and a miraculous spring rose from the spot upon which her head fell. Fortunately, she was restored to life by another saint, the white circle around her neck acting as a symbol of her piety and martyr status for the rest of her life, and the aforementioned spring became renowned for its curing capabilities.

It’s said that many medieval kings visited the spring in search of divine guidance, strength and cures, including Richard I, Henry V, James II and, much later, Princess Victoria. The chapel that accompanies the spring was built under the guidance of Lady Margaret Beaufort in the 15th century, the walls of which have been gratefully graffitied by those cured in the clear waters of St Winefride’s Well. Services are still conducted in the neighbouring St Winefride’s Chapel throughout the summer season, but visitors are welcome to visit throughout the year. There is also a small museum and a library within the same site, which features ancient relics from the time of, and relating to, St Winefride herself. Whether you’re a believer or not, this peaceful spot makes for a wonderfully meditative place visit.

Currently standing at the longest aqueduct in Great Britain and the highest canal aqueduct (who knew there were so many different types?) in the world, the polysyllabic Pontcysyllte Aqueduct dominates over 300 metres of the Welsh countryside, with the connecting canals and walkways adding up to over eleven miles of traversable routes.

Construction began in 1795 under the guidance of up-and-coming civil engineer Thomas Telford, who would later go on to create the Menai Suspension Bridge (also in Wales), but took over 10 years to complete due to the size and complexity of the project. On your visit to the Pontcysyllte Aqueduct, start at the Horseshoe Falls, which is where the aqueduct scheme as a whole began – the Horseshoe Falls were designed to draw water from the River Dee into the new canal, and the success of this smaller build spurned the creation of the aqueduct as a whole. 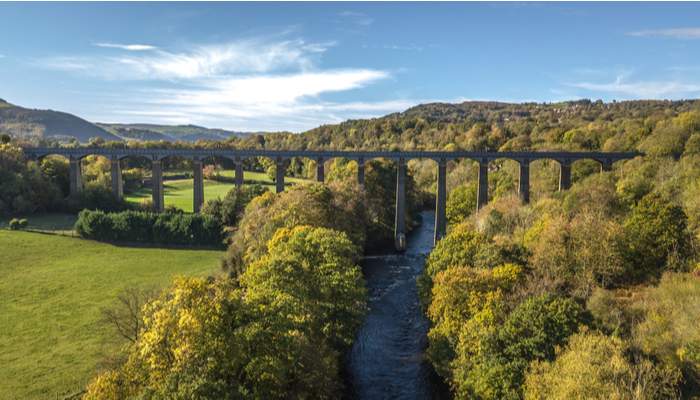 Elsewhere along this picturesque country route, you’ll bypass a variety of other beautiful edifices, including the Victorian Chain Bridge and accompanying Berwyn Station, the peaceful 13th-century ruins of Valle Crucis Abbey and the strikingly Gothic Plas Newydd House and Gardens, complete with a cafe for that all-important tea and cake refuel. It is, of course, the Pontcysyllte Aqueduct that draws the most attention in the area, and with good reason: standing at 38 metres high and showcasing eighteen stone and iron arches, this surprisingly elegant edifice makes for an excellent photo op!

We hope our rundown of highlights in North East Wales has inspired you to make a visit during your next staycation.