The Filming Locations From Your Favourite Festive Movies

Christmas movies always provide a little escapism to warm the soul. Watch them from a festively-decorated living room, with yuletide snacks and hot chocolate, there really is no better way to enjoy that nostalgic magic of Christmas. 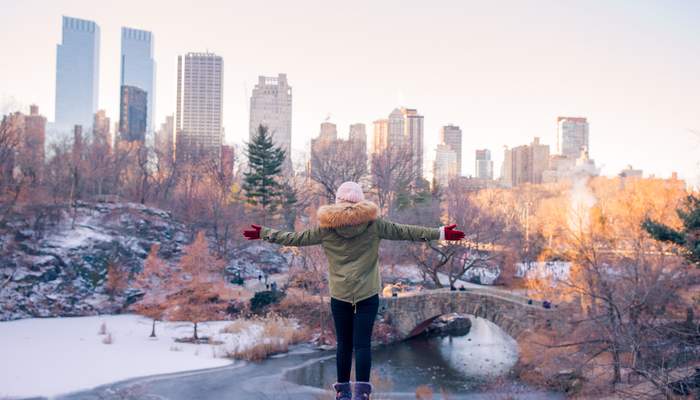 So we are debating whether anyone who was involved in the production of The Holiday had ever been to the UK over the festive season, because it’s incredibly rare that we experience a white Christmas. But we’ll let that little detail slide because of how beautifully our green and pleasant land is depicted. Filmed in Shere and Godalming – Iris swaps her quaint cottage for Amanda’s mansion in LA. We see Amanda navigate icy roads (that gets a tick for accuracy), buy lots of holiday supplies at a crunchy village store (another tick), and cosy up under layers of dressing gowns and blankets in bed because it’s so flipping cold (tick). We’re just not sure of the accuracy of dashing single strangers showing up at your door? Unfortunately, Rosehill Cottage was just a set, but the cottage that inspired it is real and you’ll find it in Holmbury St Mary.

Everyone dreams of experiencing NYC at Christmas, and Buddy the elf is one of the lucky ones. Offering plenty of shots of the streets of Manhattan sidewalks, crossings and coffee shops, Buddy also visits the Rockefeller Centre – one of the must-sees at this festive time of year, thanks to its iconic tree. As with any other New York movie, Central Park plays a starring role and she does a stand up job. But some of our favourite scenes were actually shot in the iconic department store, Macy’s, posing as Gimbels. This is where Buddy ascends the escalator in an uncomfortable position, creates a truly magical grotto, and where his memorable rendition of Baby It’s Cold Outside with Zooey Deschenel takes place.

Never has London played such a central role in any film as it does in Love Actually. The film follows a plethora of characters from all corners of the city in the run up to Christmas. We begin in the arrivals area of Heathrow Airport, and enjoy shots of the Thames in many scenes, we see Downing Street – though that fantastic dance routine was filmed inside a studio rather than in Number 10. Then there’s ‘the dodgy end of Wandsworth’, and St Luke’s Mews in Notting Hill where the iconic ‘cards on the doorstep’ scene was filmed, which has since been referenced in many other moments of pop culture, because it had such a lasting impact on all of us! Of course there’s also Selfridges, where THE necklace was bought, a very quiet Selfridges in comparison to how busy the department store is during the run up to Christmas these days. But our capital was captured perfectly in Love Actually and has been frozen in time in these fantastic shots!

Single All The Way

It’s a new one on our radar, but we urge you to give Single All The Way – now streaming on Netflix – a go, because we think it could become a serious Christmas classic. It’s got all the ingredients to make a lasting mark: snow, a large interfering family, a small town, a Britney lip-sync dance scene, and of course that all-important love story. It’s set in a location that we don’t regularly come across in Christmas films – New Hampshire, though it should be more regularly featured as it makes for an appropriately festive setting for Christmas, though most of the film was actually shot in Quebec, Canada. Fun fact, filming took place in March of 2021 at Beaconsfield Golf Club, where the new movie Home Sweet Home Alone was also filmed!

We can hardly mention Christmas films without referencing family favourite – Home Alone 2: Lost in New York. Now, we could talk about the first instalment from Kevin McCallister, but quite frankly, most of the first movie was filmed at 671 Lincoln Avenue, Illinois, and many of the scenes weren’t sets, but filmed inside the actual house. Anyway, in the second movie, Kevin makes it on the annual Christmas trip, but catches the wrong plane – to New York. On arrival in the city he decides to set up camp in real life hotel The Plaza, where you can actually stay if you visit the city. Just like with Love Actually, the filmmakers decided to give us a great tour of NYC, with shots of the Statue of Liberty, views from the top of the World Trade Centre, Battery Park, Wollman Ice Rink, and Central Park, where he meets the Pigeon Lady. One of the more memorable moments is at Duncan’s Toy Chest, where Kevin sets traps for Marv and Harry, which is actually supposed to be FAO Schwarz.