As Audrey Hepburn said, Paris is always a good idea! It’s an even better idea though, when you have a bit of insider knowledge about the City of Love. Make a note of some of our tips to ensure that your city break flows as beautifully as the Seine… 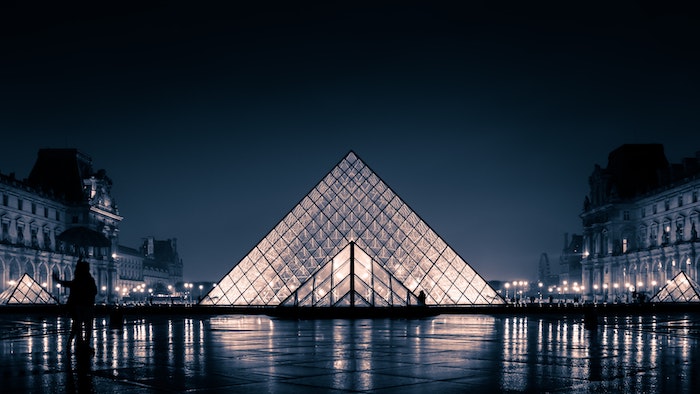 On Wednesdays and Fridays, the Louvre Museum – one of the most famous museums in the world, never mind Paris – stays open until 9:45pm. Plus, if you’re under 26, entry is free! Not only is this a rare opportunity to see its incredible collections under the atmospheric cloak of darkness, but the galleries are likely to be much less full, making for quite a magical experience. We recommend going for an early dinner, and then wandering through the museum at your leisure… 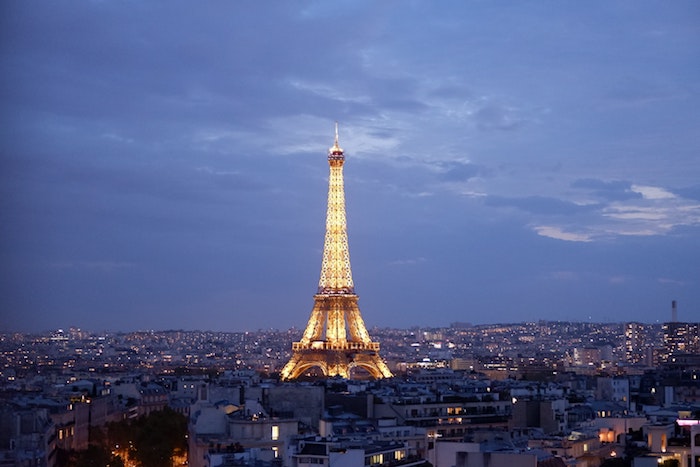 As one of the most visited attractions on the planet, it’s highly unlikely that you won’t have to queue to get in to the Eiffel Tower. There are however, some ways of making your visit smoother. Firstly, make sure you book a ticket in advance, and if you don’t mind climbing the stairs, then you could save some time in the queue by climbing up to the second floor instead of taking the elevator. There are also a few restaurants in the tower, and if you have a booking at one of them, your time waiting in the queue will be significantly shorter. 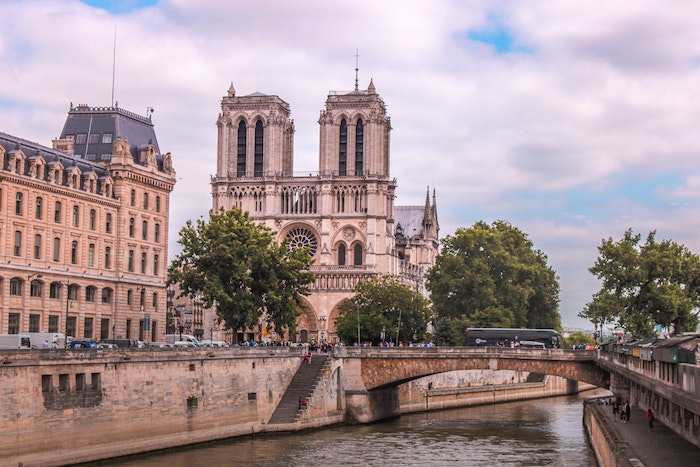 Following the cathedral’s famous fire in 2019, Notre-Dame is actually closed for reconstruction until 2024. If you’re visiting in the meantime, you can get your architecture fix at the nearby Sainte-Chapelle chapel located on the Île de la Cité on the River Seine. The Gothic-style chapel is home to some incredible stained glass windows – the largest collection of 13th-century stained glass in the world, in fact!

The Passages of Paris 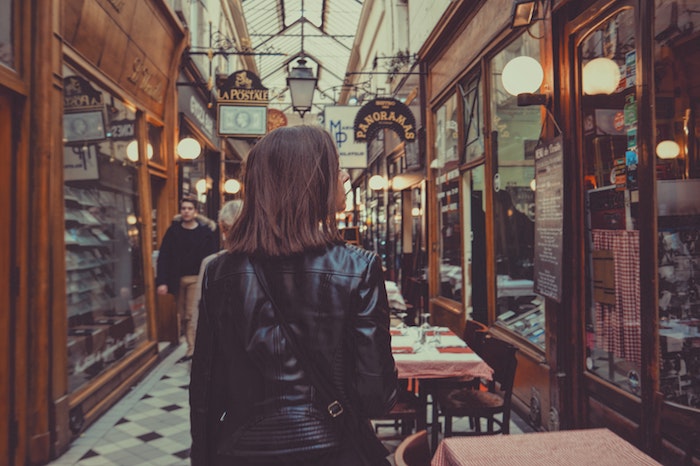 Particularly convenient for a rainy day in the French capital, the covered passages of Paris are ornamental thoroughfares that run through the centre of the city and were built in the 19th century. Along them you’ll find upmarket shops and boutiques – Galerie Vivienne is one of the most popular and decorative passages, and here you’ll find mosaic floors and high glass ceilings as well as galleries, book shops and tea rooms. 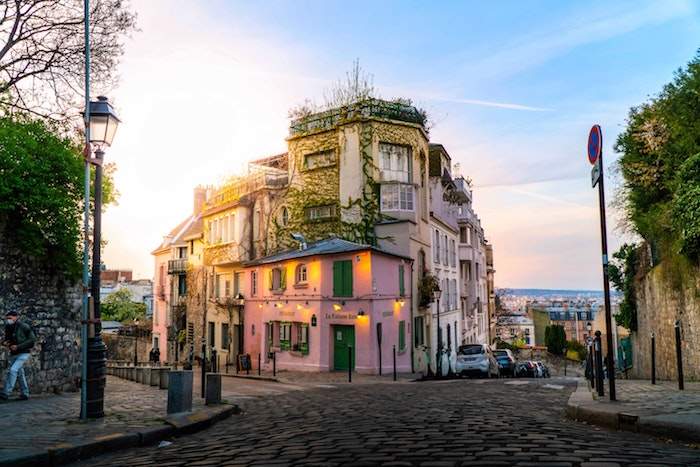 There’s plenty to fill a day of sightseeing in Montmartre alone – from the Sacré-Cœur to the mindboggling sinking house. There are lots of popular Instagram spots too, including those that you might recognise from Emily in Paris, however actually dining in them might not be the most thrifty decision… We recommend packing a picnic filled with local delicacies like fresh bread, creamy cheese and cold wine and enjoying lunch on one of many grassy spots overlooking the city or the Sacré-Cœur – you’ll save quite a bit of money, plus it sounds rather romantic to us… 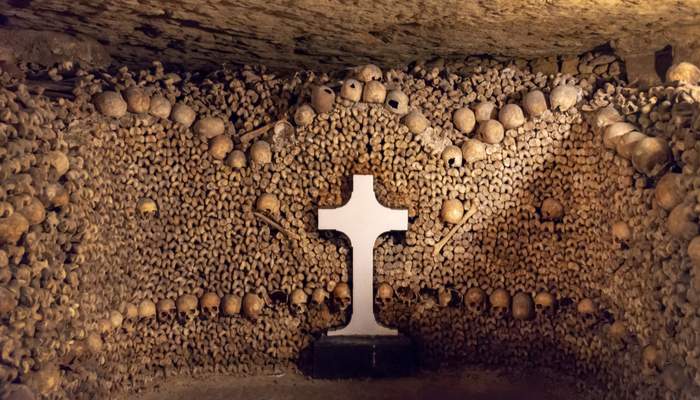 The Catacombs of Paris are an unusual attraction, although one that is perhaps not for everyone. Starting in the 18th century, tunnels beneath the city were filled with the remains of the dead that could no longer fit in the city’s graveyards. The bones have been arranged in artistic patterns and line a giant network of tunnels. It is possible to tour the tunnels, however only 200 people are allowed in at a time. We recommend buying a ticket in advance and getting in the queue early to avoid a very long wait. 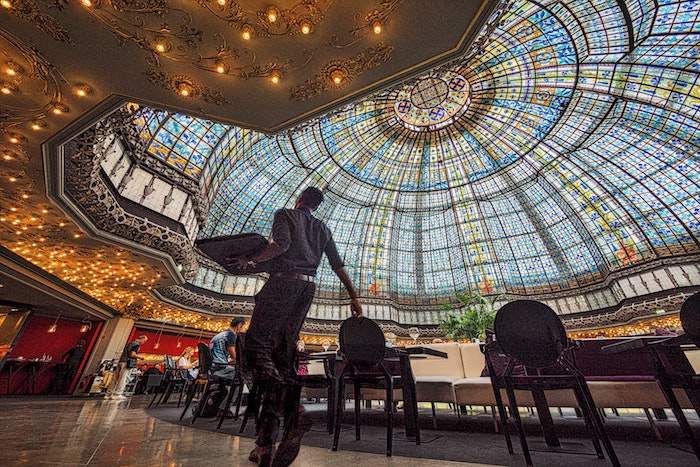 Not only does the Galeries Lafayette hold a huge range of desirable brands and shopping opportunities beneath is spectacular glass dome, but the eighth floor offers one of the best panoramic views of Paris, and you can witness it without spending a penny. If you time it right, you can get a beautiful photograph of the sun setting over the city, including Opéra Garnier, the Eiffel Tower, Sacré Cœur and Notre Dame. 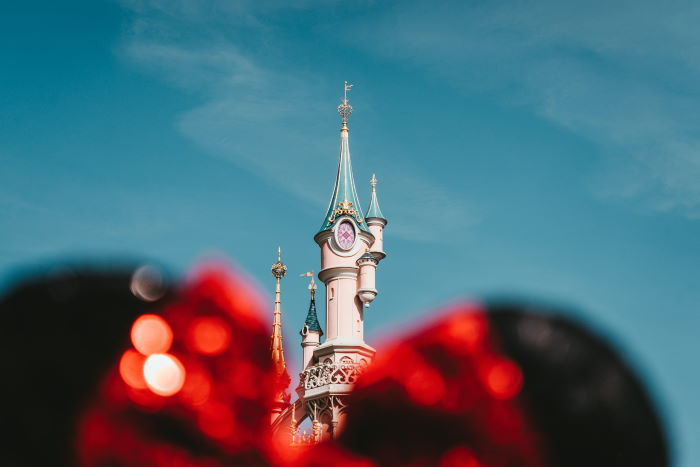 If you’re visiting Disneyland Paris with very young children, then the park provides a baby switch option, which means that one parent can look after a baby while the others visits an attraction, before switching out without having to queue up again. Another handy piece of information to know if that you can take in your own food to the park and there are dedicated picnic areas set up, so you won’t have to fork out on meals in the park if you don’t want to.