10 of Italy’s Most Colourful Seaside Towns

Italy is known for its vibrant culture that celebrates food and la familia and its spectacular cities that reflect both an ancient historical heritage and modern cosmopolitanism. The country is also celebrated for its array of natural landscapes – from the verdant green Tuscan trees of the north to the hot, scorched earth of the south.

Adding to all of this is a sweeping coastline peppered with colourful villages that cling to seemingly impregnable cliffs. Where many have typically begun life as humble fishing villages, these pockets of Italian culture with their meandering cobbled backstreets have captivated tourists who have been flocking to their shores for centuries. Here are 10 of the most spellbinding.

Technically five separate fishing villages only connected by boat, this ancient stretch of Italian coastline has been listed as a UNESCO World Heritage Site. While its popularity means it isn’t the undiscovered paradise it once was, its rustic charm endures in the form of incredible architecture. Over the centuries, carefully built terraces have been added to the steep landscape and the villages clamber over clifftops that dramatically fall away into the sea. The sun-baked yellow, deep terracotta and bright orange make the contrast against the cliffs and the azure water even more spectacular. 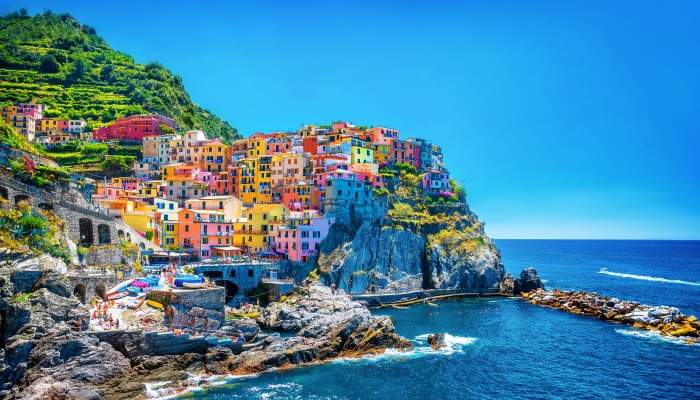 The island of Capri has long been known as the playground of the world’s elite, enticing all from Hollywood royalty to Russian revolutionaries who would spend long indulgent summer months on the island. The main town is set high up above its craggy cliffs, where labyrinthine alleyways lead out onto enchanting piazzas. It is easy to see the romance of Capri and its unassailable allure, with expensive boutiques selling chic designer clothing alongside cool cafes and jazz bars with a view. The island is characterised by its vibrancy and colour, whether it’s the yellow of the homemade limoncello, the bright flowers that add a splash of colour to the white-walled houses or the deep blue of the Mediterranean that separates dreamy Capri from the mainland, and from reality. 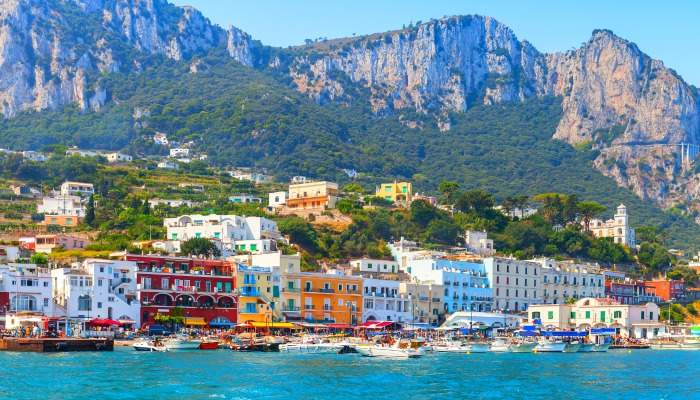 Positano is tucked away on Italy’s southern Amalfi coast and has long been a popular destination amongst fashionistas visiting from trendsetting Milan and beyond. The chic resort town is dominated by grand hotels draped in colourful flowers that reflect the stylish bygone era of 1960’s moda Positano and the glamorous Italian Riviera lifestyle. Famously, it was Positano that introduced the bikini to Italy’s beaches from neighbouring France. From the sea, the view of the town is of cascading multi-coloured terraces that fall away to a picturesque crescent moon bay brimming with colourful sun umbrellas. 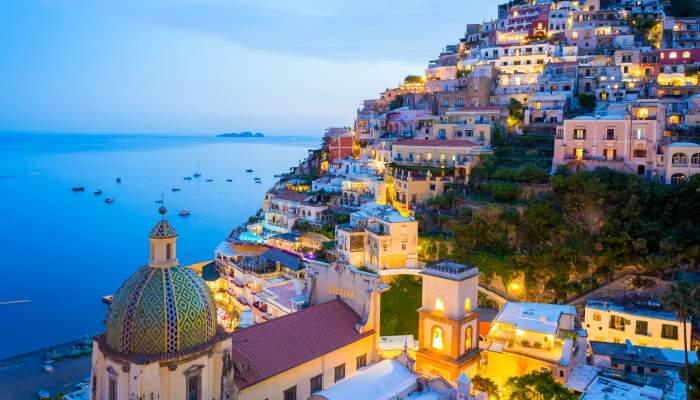 Noli is situated on Italy’s northern coastline and boasts terracotta medieval towers and a crumbling fort wall. The small promenade and sandy beach is lined with palm trees and colourful fishing boats, but beyond the town wall are narrow, weaving alleyways that lead out onto sun-baked piazzas surrounded by soaring spires. Here, in the heart of the town, locals can be seen enjoying a seafood dish al fresco or watching the world go by, solely accompanied by their rosary beads. The town has long been a centre for art and its vibrancy inspired the colourful strands of modern art known as pointillism and fauvism. 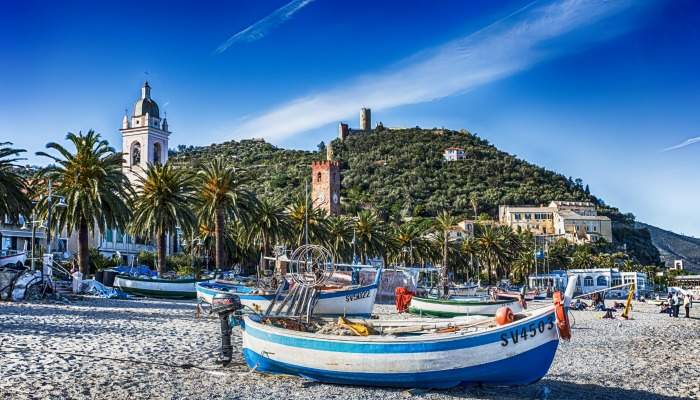 The colourful coastal village of Portofino sits on its own peninsula in the very north of Italy. Pastel-coloured houses, seafood restaurants and high-end shops fringe its Piazzetta – a small cobbled square that overlooks the harbour where fishing boats have been replaced by super yachts. Behind the row of orange, pink, and terracotta houses is dense and luxuriant forestry, meaning these colours are even more striking against the deep green of its leafy background. Portofino’s location and geography makes this spot all the more exclusive, but visitors can reach the island for a day trip and it is well worth the visit. 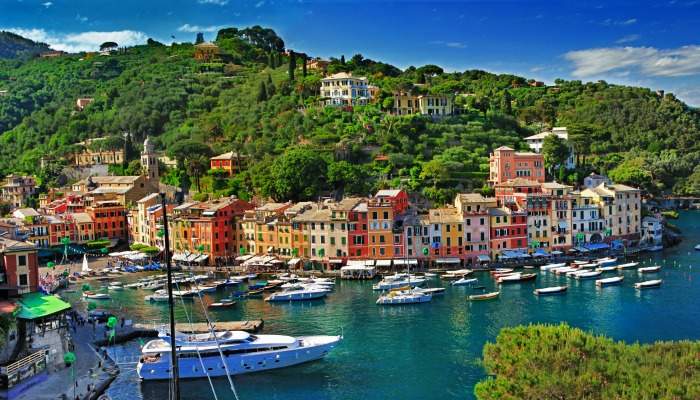 This splendid seaside resort is set hundreds of metres above sea level on the clifftops of the Amalfi Coast, boasting staggering panoramic views of the surrounding mountains and the arched horizon over the Tyrrhenian Sea. The focal point of the town is 13th-century Vila Rufolo, which has a distinctly Moorish style of architecture that adds an element of the exotic to this quaint Italian seaside resort. The view is phenomenal, and its gardens have become iconic. With a range of Italian pines and palm trees, coupled with colourful flower beds, the vista is an incredible juxtaposition of bright blue sea and sky, lush green and the bold hues from the flowers. 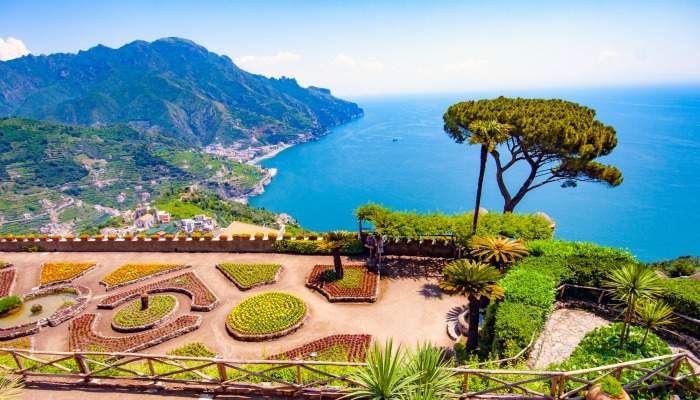 Tucked away in the north of Venice is Burano Island – a beautiful, multi-coloured archipelago linked by a series of bridges – but a spot often overshadowed by central Venice’s meandering canals and grand piazzas. Visitors to Burano will immediately notice the kaleidoscopic houses that reflect into the green waters of the canals. According to popular belief, fishermen painted their houses in these distinctive shades so they could recognise the island through the thick sea fog. The most colourful house on the island is Casa di Bepi Sua – a building embellished with bold geometric shapes in brilliant primary colours. 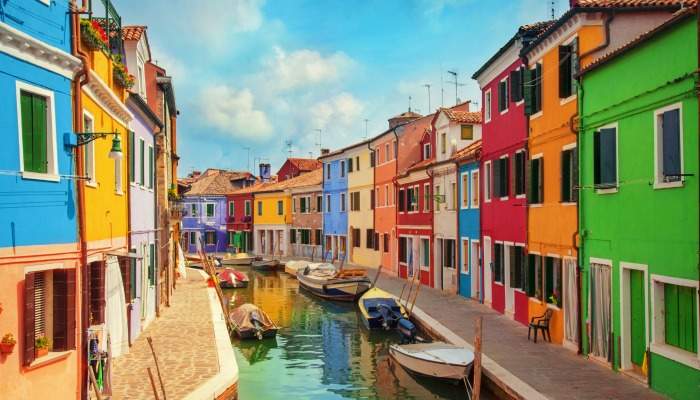 Layers of pale, soft and delicate shaded houses cascade down jagged cliffs to Procida’s waterfront – a spectacular sight that slowly comes into focus as you approach the island by boat. This fabulous vista makes Procida an off-the-beaten-track jewel in the Gulf of Naples that is often overlooked given the popularity of neighbouring Capri. This small volcanic island has an idyllic harbour that lines the seafront, with a selection of picturesque trattorias serving up a selection of freshly caught seafood. 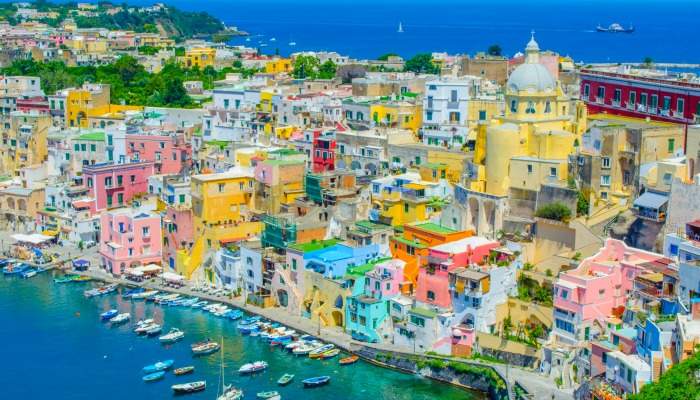 The coastal town of Sorrento faces the Bay of Naples, with the looming shadow of Mount Vesuvius dominating the skyline. The town is set high above sea level, with grand hotels perched on jutting clifftops and lined with trees, overlooking the Neapolitan Riviera. Piazza Tasso is the colourful heart of this seaside resort. It is a small but bustling square lined with bars, restaurants and al fresco cafes. The shadowy alleyways that lead off from Piazza Tasso are full of interesting shops and boutiques with wrought iron balconies adorned with flowers. 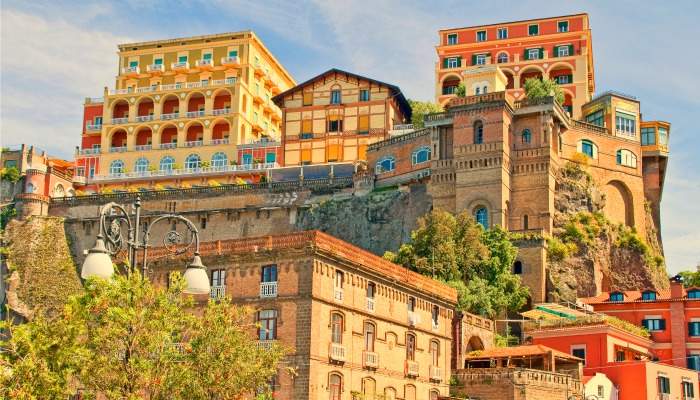 The capital of northern Italy’s Veneto region is built onto a lagoon in the Adriatic Sea. The interconnecting islands are linked by ornately designed bridges that are fantastic works of Gothic and Renaissance architecture. Gondoliers routinely punt through the city’s narrow alleyways, typically wearing a striped top, straw hat and a bright red neck scarf. Gondolas leisurely drift past some of the city’s most spectacular sights, from the Grand Canal to the Gothic Doge’s Palace and under the beautiful Rialto footbridge. The colourful architecture is Venice’s focal point which adds to the mysticism and magic of this glorious Italian city.