North East England covers a significant swathe of the eastern coast, stretching down to North Yorkshire and up to the border of Scotland. Comprised of four counties (Northumberland, Durham, Tyne and Wear and North Yorkshire), this striking area is characterised by rugged landscapes, abandoned castles, crashing waves and a thriving metropolitan scene led by the city of Newcastle. A popular staycation spot for travellers looking to blow the cobwebs away and enjoy some true northern hospitality, North East England is awash with must-visit destinations, a few of which we’ve rounded up for you here.

Newcastle-upon-Tyne and Gateshead, Tyne and Wear

Once part of the Industrial North, Newcastle has reinvented itself in recent years to become the thriving capital of North East England. Marrying its steel and coal past with the electronic present, the city is dotted with numerous must-see locations including the iconic Tyne Bridge, a resounding symbol for the city, Newcastle Castle (yes, really), and Grey’s Monument. To make the most of the Tyne Bridge, why not visit the bustling Quayside area on a Sunday for the local weekly market, before crossing the river in search of brunch?

Being an ancient metropolis, there’s an amalgamation of new and old to see here, with the gloomy Victorian Tunnels and imposing St Mary’s Cathedral giving way to fresh new developments, such as the truly striking Baltic Centre for Contemporary Art (made partially from a disused flour mill) and the award-winning Gateshead Millennium Bridge. If you’re on the lookout for souvenirs of your northern adventure, traditional Grainger Market and the Central Arcade will provide ample retail therapy opportunities, while the Biscuit Factory is certain to sate your appetite for contemporary art. It’s not all grim up north, after all! 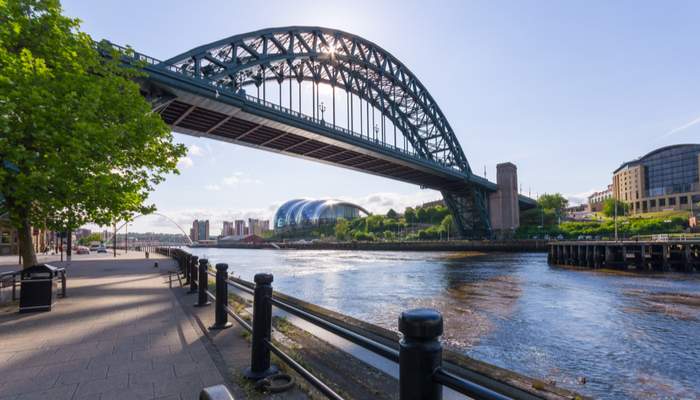 Built from coast to coast by the Roman Empire over the course of six years, Hadrian’s Wall is one of the finest archeological sites in the United Kingdom. Spanning 73 miles, some of the most famous sections of the Wall can be found in Northumberland, including Sycamore Gap, a spot made immortal by the classic film Robin Hood: Prince of Thieves. When you’re not singing Bryan Adams at the top of your lungs, look to the 80 or so forts, the 17 larger forts and two observation towers for an unparalleled sojourn through British history. Lying close to Sycamore Gap itself, discover the ruins of Castle Nick, an outpost that is believed to have been occupied until the fourth century, and a site of numerous ancient finds.

One of the most remarkable destinations along the Wall is Cawfields: built by the Second Legion to protect a weak point in the perimeter, this striking structure sits precariously on the edge of sheer crags. The Cawfields site is also renowned as an excellent Dark Sky Discovery Site, giving stargazers a wonderful opportunity to view the swirling galaxies above our heads. Although there are numerous car parks along the Wall, many visitors choose to walk the well-trodden and popular footpaths that run parallel with the boundary, so don’t forget some thick socks and your walking boots!

Did you know that Durham Cathedral’s full title is: The Cathedral Church of Christ, Blessed Mary the Virgin and St Cuthbert of Durham? Personally, we can see why it’s been shortened over the years… A Grade I-listed building and a UNESCO World Heritage site, it’s believed that a cathedral has stood on this impressive site since 995, when the Community of Cuthbert arrived from Lindisfarne to build an Anglo-Saxon place of worship. The cathedral as we see it today was begun in 1093, and remains a thriving religious site and a place of pilgrimage for Christians around the world. Alongside the impressive architecture of the cathedral itself, there are numerous ancient relics to be discovered, including the Anglo-Saxon Treasures of St Cuthbert, three editions of the Magna Carta and the largest in situ medieval monastic library in the UK, within which the earliest manuscript dates from 1473. Seated beside Durham Castle and overlooking the medieval city of Durham itself, this ancient edifice will make an excellent central focus for a day’s exploration. 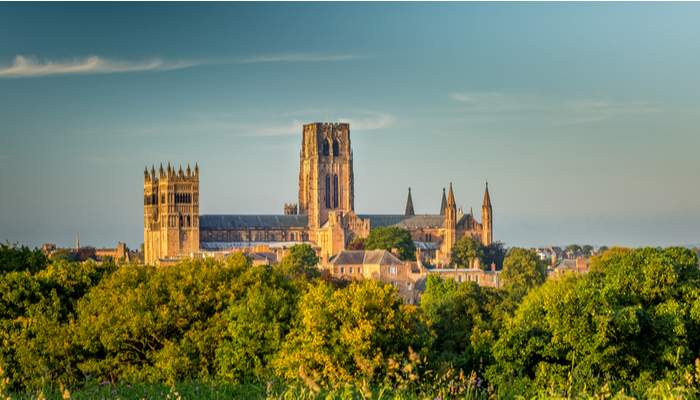 If you’re keen to discover where the community of Cuthbert originated from, look no further than the windswept Holy Island off the coast of Northumberland. This tidal outcrop has had something of a turbulent history – it has been invaded by Vikings, it is the birthplace of the Lindisfarne Gospels and it was once used as a defence against Scots and Norsemen!

Upon a volcanic rise, the medieval Lindisfarne Castle resides, with the remains of Lindisfarne Priory standing proud on the lower levels. This monastery was first founded in AD 635 and is where St Cuthbert carried out his holy work – it’s said that, 11 years after his death, his body was found to be undecayed, signifying his sanctity! Whether you believe or not, this petite spot is considered a significant site in the history of Christianity, a religion that has shaped the United Kingdom for centuries. A place of residence even today, Holy Island acts as both a day trip destination and overnight stay, but time it right as you may end up caught by the tide… 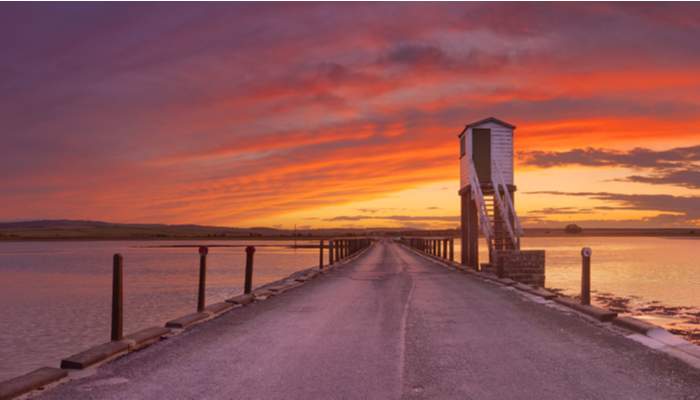 Angel of the North, Tyne and Wear

One of the most instantly-recognisable symbols of the North East, the Angel of the North stands an impressive 20 metres tall with a wingspan of 54 metres. Built to withstand wind speeds of up to 100 miles per hour (it does get breezy up North, after all!) and constructed from over 200 tonnes of steel, the heavenly figure has dominated the Gateshead skyline since 1998. Designed by renowned sculpture Anthony Gormley, this arguably iconic work is said to signify three things: ‘that, beneath the site of construction, coal miners worked for two centuries; to grasp the transition from an industrial to an information age, and third, to serve as a focus for our evolving hopes and fears’. Every year, tourists in the north, or travellers on their way to Scotland, stop at the structure for the obligatory stretched-arm photograph, making use of the gentle rise towards the Angel’s vantage point. Visible from the A1, a main artery between Northern England and Scotland, the widespread wings often act as a welcome embrace to those either travelling north or south along the miles of tarmac. 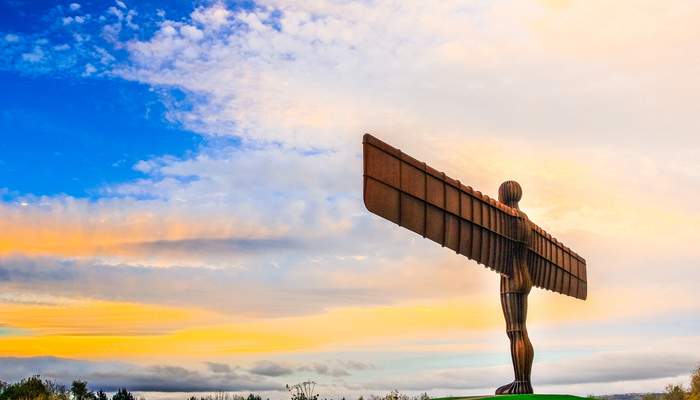 This list wouldn’t be complete without making full use of the region’s rugged landscape, so let’s hear it for the Yorkshire Three Peaks, a trio of knee-weakening, blister-inducing summits in the Yorkshire Dales National Park. Reader, I’ve walked them all, but can you believe that some (fool)hardy souls choose to march the trilogy in 12 hours!? The peaks in question? Pen Y Ghent, Whernside and Ingleborough each stand at around 700 metres tall at their highest points, and offer walkers (usually ‘staggerers’ by that point) outstanding panoramas of the Pennine Range, the valley of the River Ribble and the peaks and troughs beyond. Of course, you don’t have to do them all in one go and, as Alfred Wainwright himself said, there’s much pleasure to be had in gently strolling through one of the UK’s most beautiful terrains. So, lace up your walking boots, pack your raincoat and picnic and set off (at your own pace!) into the hills for a series of climbs you won’t forget in a hurry. 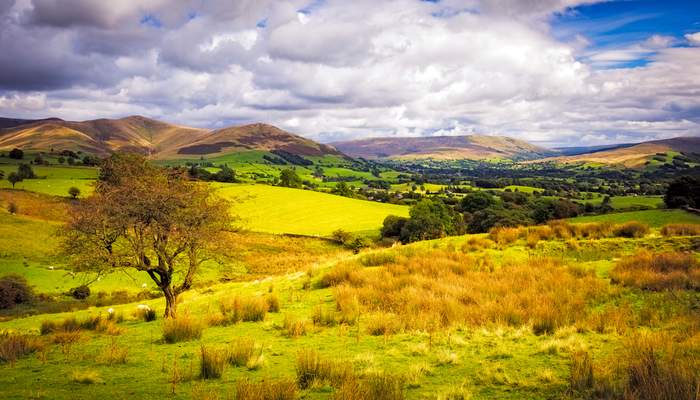