Haunted European Castles That Will Send Shivers Down Your Spine

From plunging pits presumed to mark the gates of hell, to Gaelic castles battered by merciless Irish storms, we’ve narrowed down the world’s most haunted castles *cue scary music*. 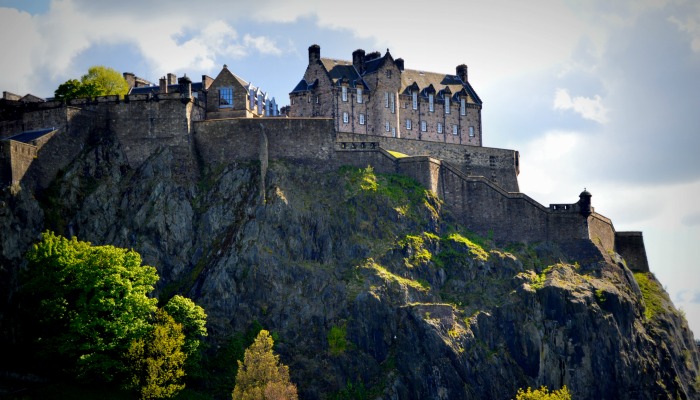 Edinburgh Castle looms over the city from its prime spot perched on top of an extinct volcano. It’s characterised by its slate grey brick that seemingly melts into the cascading rock below. The castle has been the subject of paranormal speculation over the centuries with eerie noises and unexplained sightings being a common occurrence. Noted apparitions include the sighting of an elderly man in a leather apron, as well as glimpses of a mysterious piper boy. Legend has it that when the castle vaults were first discovered several hundred years ago, a piper was sent to explore them but failed to return. Muahaha etc. 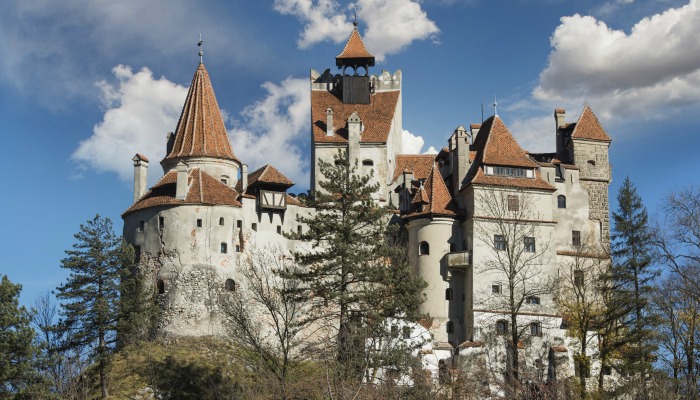 Instilling fear in the most hardened of ghost hunters, Bran Castle in Romania is next on our list and a must-see for anyone with a penchant for dark tourism. The castle is, of course, the inspiration behind Dracula’s Castle – a fictitious (or maybe not so fictitious) tale of a Transylvanian Count with a castle perched on a mountainside with sweeping views of the valley below. With its spiked towers and Gothic style of architecture, it is clear why author Bram Stoker was inspired by the building. The castle has been under paranormal investigation over the years and is thought to be haunted by Vlad the Impaler – a notorious 15th Century Romanian ruler named after his favourite method of punishment. 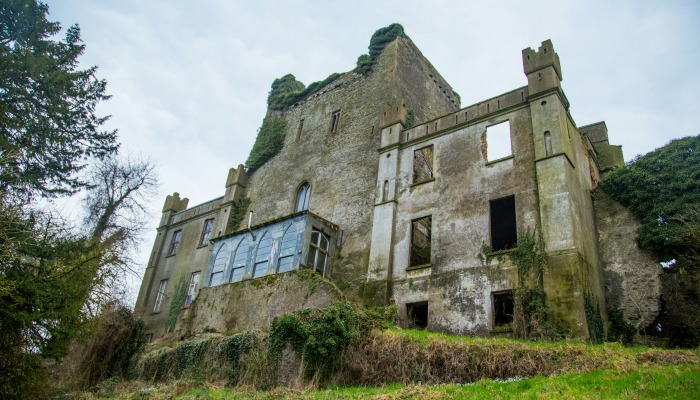 It must be something to do with those menacing grey skies looming over the Irish landscape, but Leap Castle in County Offaly, Ireland, looks particularly creepy to us. Built in the 15th Century, the castle has been the site of bitter familial disputes and bloody executions across the centuries. One of the most terrifying beings which supposedly resides in the castle is simply referred to as ‘It’. ‘It’ is a small creature with a decaying face and the rather unpleasant and potent smell of corpses. Legend has it the ‘Red Lady’ also roams the castle halls, dagger in hand. Visit at your peril… 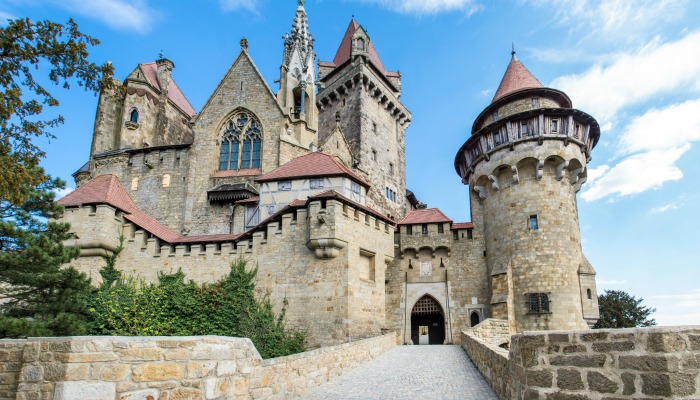 Witches Castle in Austria was once named Moosham Castle, but its eerie history has meant it is now more colloquially known as Witches Castle. The 13th century castle has a seriously sordid past and was once the site of hundreds of beheadings during the 17th Century Witch Trials. The trials were essentially a hysterical witch hunt across Europe that saw thousands accused of demonic witchery and condemned to death by pretty horrific methods, including beheadings and burning. Today the site is run as an informative museum, but come nightfall visitors have reported strange white mists reminiscent of smoke from a fire, and there are also reports of werewolves. 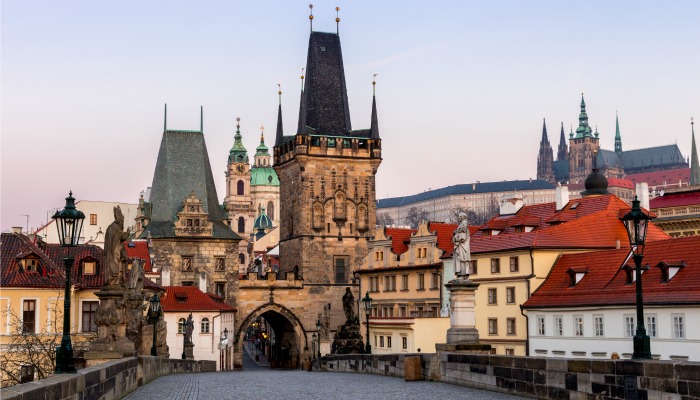 Just outside of the Czech capital of Prague is a fascinating castle built around mid-13th century that hides a sinister secret. At the centre of the castle is an incredibly deep pit, although exactly how deep is unknown. The story behind the pit is that it marks the gateway to hell and the raison d’etre of the castle is to keep spirits and demons from emerging from the centre of the earth into the outdoors. The story goes that the King of Bohemia would lower criminals into to pit and they would emerge aged and on the verge of death. 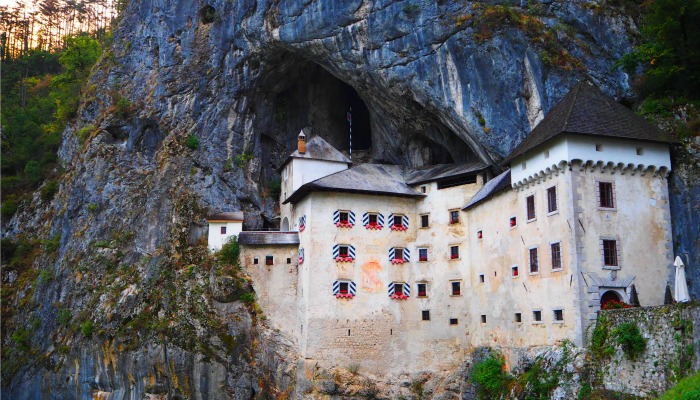 This castle, located in south eastern Slovenia, has the natural defence of an engulfing cliff face that adds to its intimidating character and makes it truly impregnable. Inside it’s hard to differentiate where the castle ends and cavernous caves begin, and what with its secret tunnel network, the castle is a labyrinth to navigate around. The castle is riddled with tales of tortured prisoners condemned to an eternity in dank dungeons by Erasmus – a 15th Century knight who is thought to still rule over the castle walls once the sun sets. Listen out for the screams of tortured inmates whose bones lie in crumpled heaps in the dungeons. 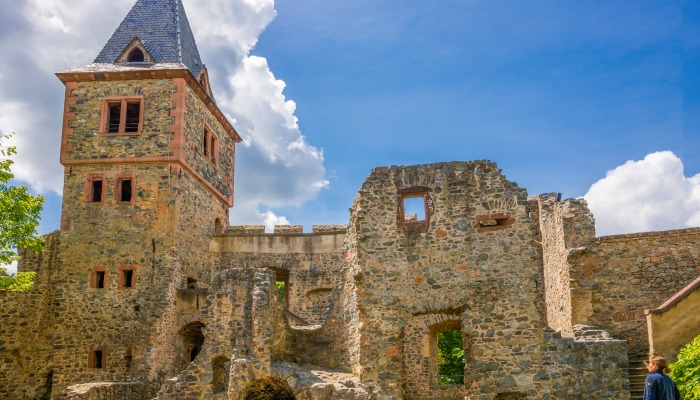 Known originally as the inspiration behind Mary Shelly’s classic novel Frankenstein, this castle in Germany has gained notoriety as a site of paranormal activity and has undergone various experiments to capture the ghouls in the act. In recent years a team of official ghost hunters (is that a job?!) used audio and video devices and heard sounds from the chapel and entrance tower. There has also been reports of strange happenings in the forest behind the castle. Compasses don’t work in the heart of the forest, allegedly due to the magnetic rocks in the earth… suspicious. 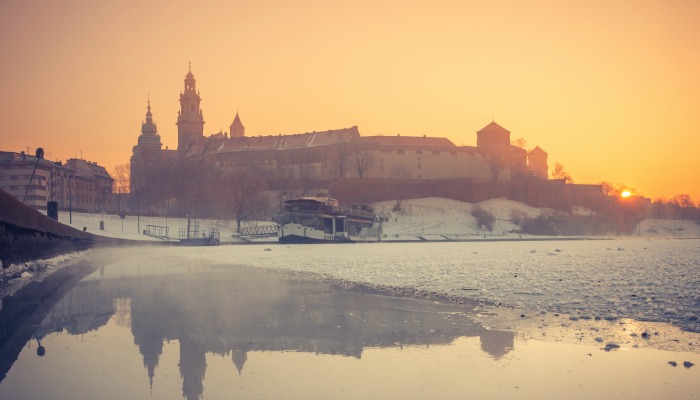 Wawel Castle in the heart of Poland‘s capital Krakow is said to be the most haunted site in the entire city. Many of Poland’s kings were crowned here and lie buried in the castle vaults. Visitors to these vaults have heard eerie music seeping from the stone walls and people often report feeling oppressed inside the castle. The hill the castle sits on is riddled with caves including the lair of a mythical dragon. Be sure to visit the metal sculpture that marks the entrance to the dragon’s cave and stick around to see it breathing fire oh so realistically.