A Taste of Italy

Food is and always has been a hugely important part of Italian culture. With each region and city boasting their own local dishes and produce, no food in any two places in Italy is ever the same. Even the most famous pasta dishes will vary from town to town with each area putting their own stamp on it. From the cheeses, to the meats and even the olive oils, every ingredient in Italy is unique to the town in which it was produced, and with 20 different regions, that’s a lot of food! We’ve chosen the capital cities of some of our favourite Italian regions and the foods you should be eating when you visit. 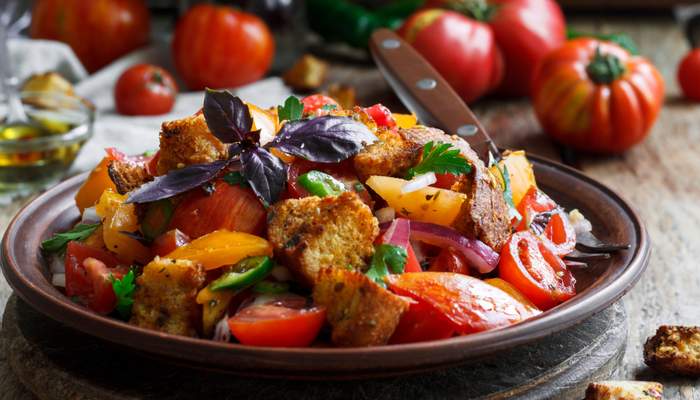 In Florence, it’s all about the bread! In fact, this happens to be the case throughout the whole of Tuscany. The food in this region is very much based on the idea of cucina povera, or ‘poor kitchen’ as it literally translates. Inexpensive but filling meals were always the aim of Tuscan cooking in the past, and even now in the present day much of this region’s cooking still remains the same out of a pure love for these traditional dishes.

Panzanella is one of the top Florentine dishes to try. The use of stale Tuscan bread may not sound overly appealing but once soaked in balsamic vinegar and extra virgin olive oil it comes straight back to life. Typically a dish to enjoy in the summer, this Italian salad, along with the soaked torn bread, includes fresh tomatoes, onions and basil leaves. 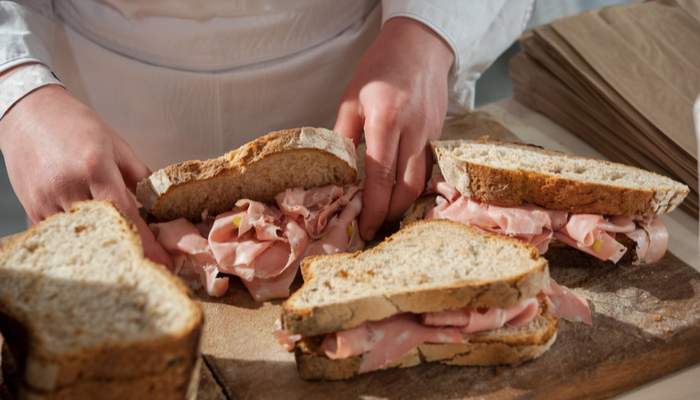 Bologna is a town very famous for its cuisine. Home of tortellini, tagliatelle, ragù and many other delicacies, it’s fair to say that Bologna is a foodie’s dream. Probably the most well-known dish to come out of this Italian town is ragù (alla) bolognese, or spaghetti bolognese as we have come to know it over the years. The name pretty much means a meat sauce that originates in Bologna, however the main difference between our version and the real dish is that spaghetti would never be used in Italy!

As well as being famous for its pasta and ragù, it is also the mortadella that many travel to this region to try. flavoured with spices, mortadella is an oversized Italian sausage made of ground pork and consisting of small cubes of fat. Unlike regular cured meats, this one is heat-cured and is most commonly used in tortellini and epic Italian sandwiches. 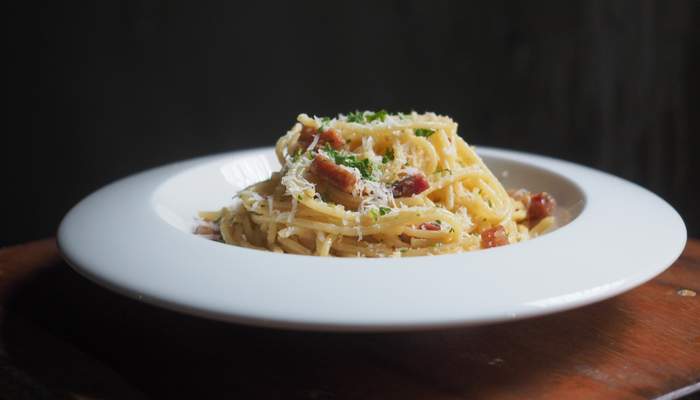 Carbonara is a dish that many of us will be quite familiar with. Served in virtually every Italian restaurant across the UK, it is a firm favourite here along with pizza and bolognese. Like most Italian food history, there is much discrepancy over where exactly this dish originated from, with each town and region claiming every famous dish as their own invention. Despite this, it has quite commonly been accepted that carbonara did in fact originate in Rome.

Although a British favourite, most of us probably haven’t tried a true Carbonara here in the UK. The use of double cream, streaky bacon and sometimes additions of chicken and mushrooms is all wrong. A true Roman carbonara would have none of these ingredients. In fact, the only thing we seem to have gotten right is the spaghetti. Traditionally all that is used is eggs (mainly the yolks), pancetta or guanciale and parmesan. Add a bit of salt and fresh black pepper and buon appetito! 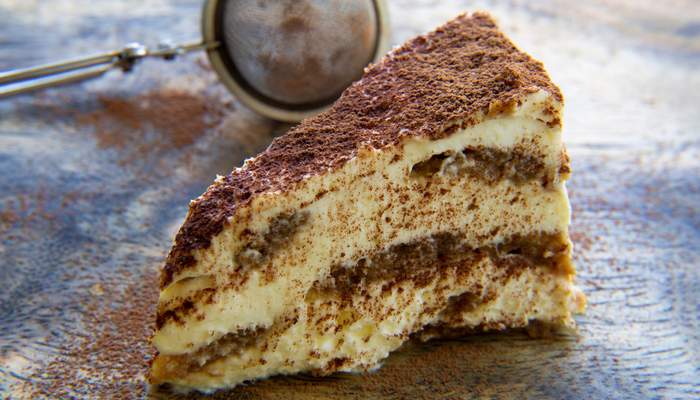 The general belief in Italy is that tiramisu was first invented in the 1960s in the region of Veneto in a local restaurant in Treviso. The creator of the dessert is said to have named it after his apprentice at the time, whose maiden name was Tiramisu. Seems a likely story, although there are plenty of Italians who dispute that tiramisu was in fact invented in the 17th century in Siena.

Regardless of where it was invented, tiramisu is by far the most famous dessert in the Veneto region, particularly in Treviso. Made traditionally with finger biscuits soaked in coffee, egg yolks, sugar, mascarpone cheese and cocoa, the original version is far from the kind we eat here in the UK. 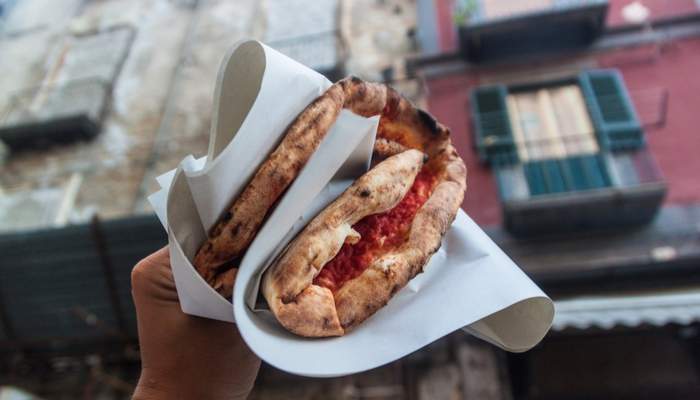 Probably the most famous of all Italian cuisine is the pizza. And where better to go and have one than Naples, in the Campania region of Italy where pizza was invented. In the 18th century, those who lived in the poor area of Naples began spreading tomatoes onto yeast-based flat breads and the pizza was born. Since then, the world has gone pizza crazy, however to this day many Italians consider there to be just two true pizzas: pizza marinara, traditionally prepared by a seaman’s wife with tomatoes, garlic, oregano and extra virgin olive oil, and more famously, the Margherita. Named after Queen Margherita, this pizza was created in 1889 and was made especially to resemble the Italian flag – red tomatoes, white mozzarella and fresh green basil. 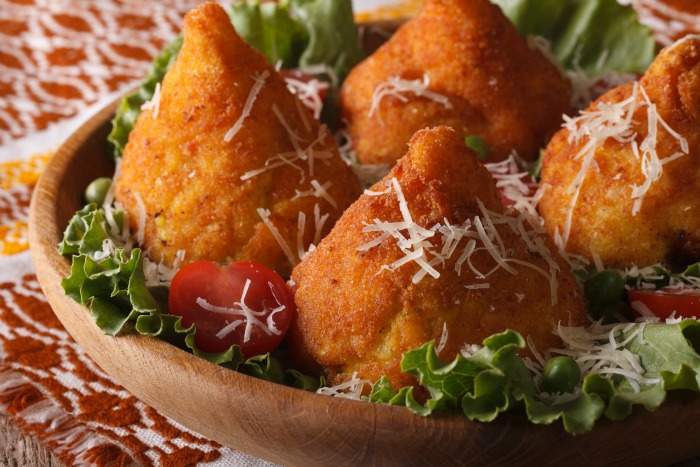 Believed to have originated in the 10th century during the Arab rule, arancini is one of Sicily’s most famous street food snacks. For those wanting to try traditional arancini, Palermo in Sicily is most definitely the place to go. These famous rice balls, great for using up leftover risotto, are usually stuffed with ragu and cheese, rolled in breadcrumbs and deep fried. There are however, several variations within Sicily and even more across the other regions of Italy.

The name itself comes from the rounded shape and orange colour of the original arancini which pretty much translates to ‘little orange’, although these days many have more of a conical shape to them. 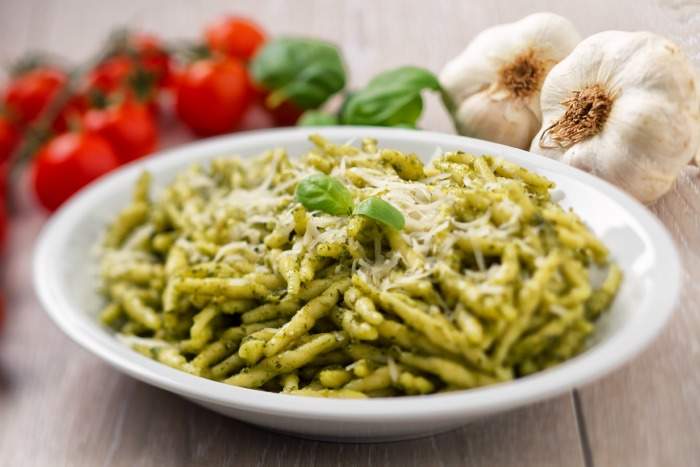 Pesto Genovese is without a doubt one of Italy’s most famous sauces. Bright green in colour and traditionally packed with fresh basil, garlic and pine nuts, then mixed with parmesan and olive oil, this sauce is widely used in many countries across the world. Pesto originated in the 16th century in the city of Genoa and the name originates from the Genoese word pestâ, which means to pound or to crush.

Although pesto is commonly green and basil based, recent years have seen many different variations – from sun-dried tomatoes to peppers. Pesto has turned into a very versatile sauce over the years and is sometimes used as a dip rather than the traditional pasta sauce. Not very Italian, some may argue, but still delicious nevertheless!