Historically, fiestas have functioned both as a social engine and a liberation from the day-to-day working world. In Spain, almost every town and village has their own version of an annual fiesta which can last anywhere from a few days to a few weeks. They take this opportunity to venerate the saints associated with their district and honour them how any saint would wish to be honoured – by getting black-out drunk and eating a hell of a lot of food. In some cases, the food is pelted between members in these growing crowds instead of filling their beer-filled bellies.

People now flock from all over the world to participate in Spain’s festivals and fiestas, and the populations of some of its smaller towns can double in size during their fiesta periods. The people of Spain work hard and play hard – and these fiestas are extreme examples of their playtime. It’s no wonder then that more and more tourists are thronging towards Spain – where, if you can keep up, you can have days of dancing and celebrating Spanish culture in the comfortably warm sunshine. 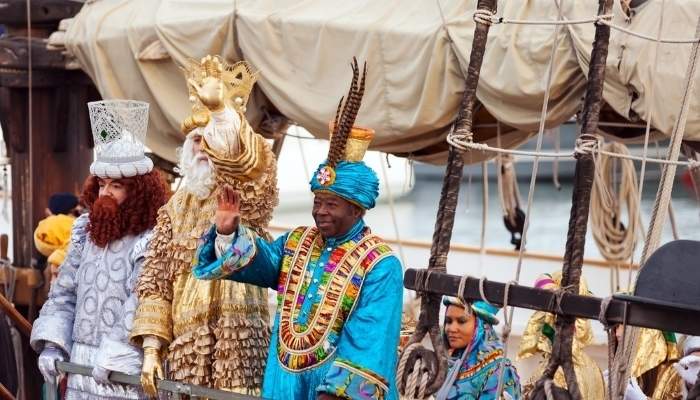 Three Kings Day is celebrated in almost every Spanish city and town on the 6th January each year, but our tip is to avoid the overcrowding of Barcelona and head just under an hour and a half’s drive away to Reus. It’s less busy, but it still holds all of the extravagance of the bigger city. There’s more of a sense of authenticity and tradition – and you can really feel the children’s excitement as they wake to find presents left on their doorstep in the morning.

On the night before the extravaganza takes place, children leave out their shoes for the Kings to fill with sweets and gifts the next day. Then, these gift-givers parade the streets – and in Reus the Kings usually arrive on camels or horses – and continue to give gifts to the town throughout the day. 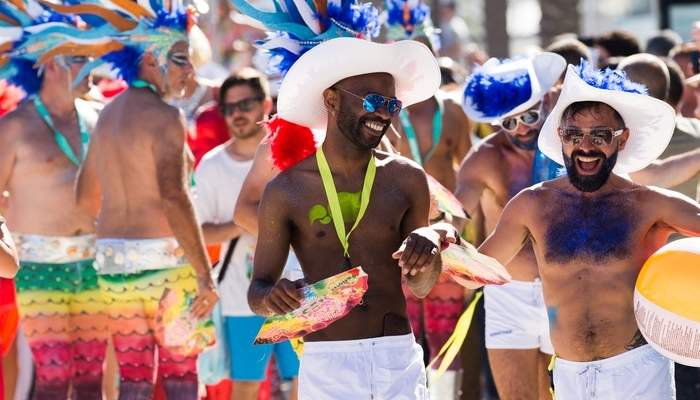 It’s a wonder that such a tiny town could invite such enormous crowds, but Sitges, which is situated just a few kilometres from Barcelona, can handle the swelling crowds with aplomb. The Sitges Carnival is a week-long queer extravaganza, filled with booze and boys, and glittered with drag queens. It’s basically a bigger, longer Pride. Although it’s at a slightly cooler time of year, you’ll still see abs and beer-bellies aplenty, and with all the dancing that goes on in the streets, you’ll be sure to get pretty sweaty pretty quickly. With some help from this carnival, Sitges has now become one of the most iconic and safest destinations for gay people around the globe. 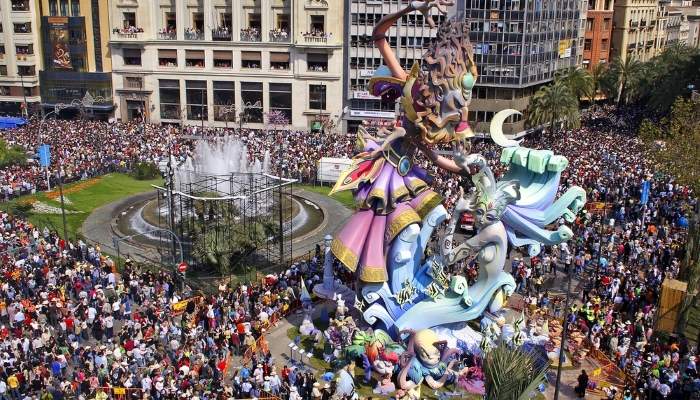 Valencia‘s Las Fallas festival pays its tributes each year to San José, the patron saint of carpenters. The Valencian folk create gigantic outlandish figures, parade them through town and then set them on fire. These enormous creations are called ‘ninots’ and are usually satirical imitations of well-known celebrities and politicians both from Spain and afar. 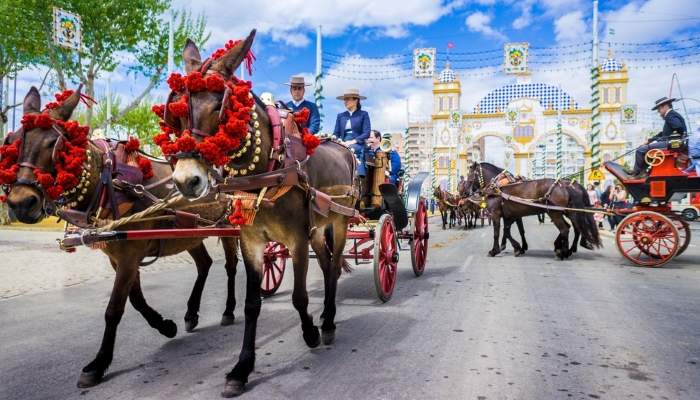 There’s a frisson of excitement in the jasmine-smelling air for this traditional Spanish festival in Seville. The festival began in 1847 with a parade of cattle on the grounds of Prado de Sebastian, and has since bloomed into an all-eating, all-drinking, all-dancing blow out. With traditions still intact, ladies wearing flamenco dresses roll out on horses to initiate the festivities. Then at midnight, the mayor switches on thousands of lights which illuminate the Portada – the structure at the entrance to the Feria. The next day, casetas (large tents) line the streets, where families gather to eat, drink and dance together. 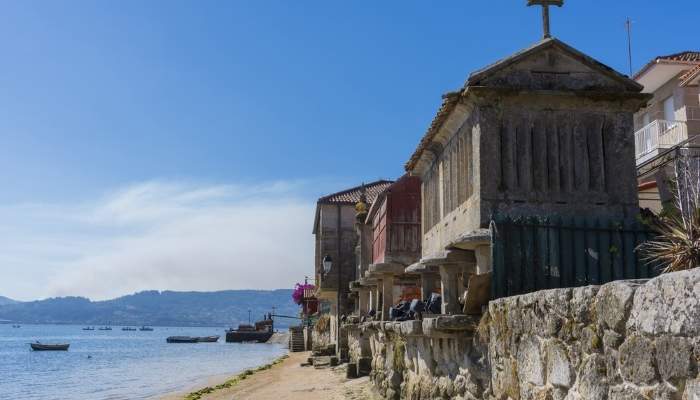 Had a near-death experience this year? Perfect! You now qualify to have yourself paraded around the streets of Las Nieves in a coffin! Family and friends will carry you around in your coffin, or if you have neither of those, then you’ll be carrying your own coffin. Party!

Really though, this is quite the spectacle – and it’s becoming ever-more popular. With Las Nieves’ population of just 4,000 more than doubling for this event, though it sounds a tad morbid, this is a chance to celebrate life as any good Spanish festival does. And yes, that means alcohol is involved. As coffins are presented to Santa Marta (‘Saint of Death’), wine and beer is guzzled.

This little town in Galicia is situated in the most isolated region of the Spanish peninsula and is marked by a history of witchcraft and supernatural happenings. This, as well as all the coffins, make for one of the more spookier parties you’re likely to attend.

The start of this festival is signalled by a rocket (known as the  txupinazo) being fired into the sky. Then, Marijaia – Bilbao‘s Papier–mâché mascot who looks a bit like a character from Eastenders – makes her entrance onto the balcony with the vast crowd gathered below. Hundreds of thousands of people flock to the streets in this nine-day festival, with most of the town’s residents taking this time off work, and with many of the shops closing – the giant Papier–mâché figures get all the attention they deserve.

This festival is dedicated to the Virgin of Begoña, who is lovingly referred to as ‘Mother’ by the people of Bilbao, and, as with any good dedication, it’s certainly not done sober. There’s stuff for the kids too, including ‘Gargantua’ – a gaping-mouthed giant with a slide which descends down to his throat. There’s absurdity everywhere – both for the drunken grown-ups and the kids. You can take part in wood-chopping, strongman, and even ‘ugly face’ competitions. Then at the end of the nine days, Mother is set on fire and the town dances around her flames. 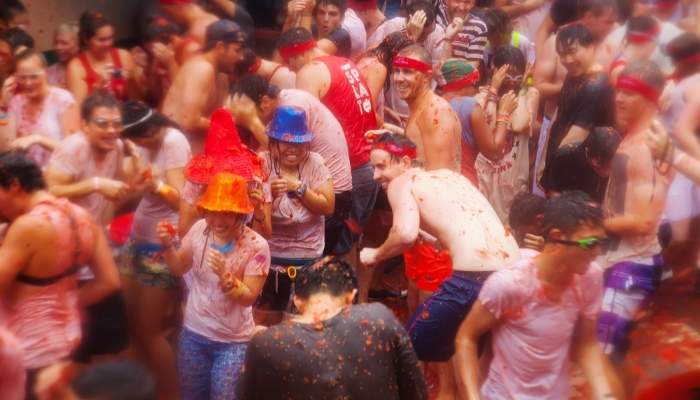 Heralded as the world’s greatest food fight, La Tomatina in Buñol, which is in the west of Valencia, invites thousands of messy eaters and over one hundred metric tonnes of tomatoes to redden its streets each year. Buñol’s puny population of just 9,000 extends to over 50,000 for this tomato war, where every man is for himself.

Before chaos ensues, members from the crowd try (and very often fail) to reach a ham which sits atop a two-storey tall greasy pole. Then, it’s time for tomatoes. Truck-loads of these mushy bullets unload into the centre of town and the crowd scrambles to get the largest handful they can. The horde has just an hour to get the streets and one another as pulpy as possible, before fire trucks roll in and spray away the tomatoey debris.

The festivities are a tribute to the town’s patron saints, Luis Bertrand and the Mare de Deu dels Desemparats – but its origins are unknown. Nevertheless, this is certainly something to add to the bucket list. 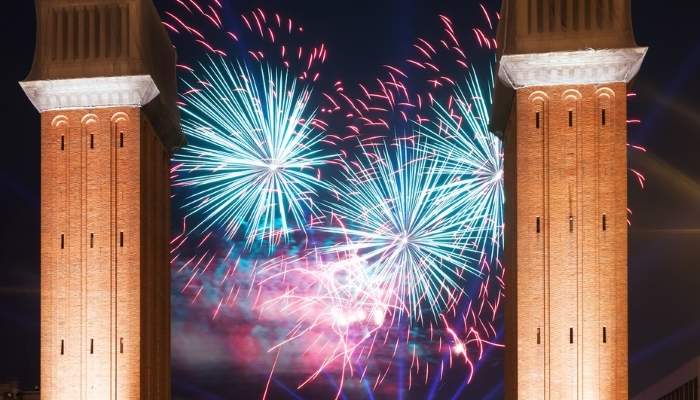 Celebrated in honour of Saint la Mercè (Virgin of Mercy), the Fiesta De La Mercè is Barcelona‘s largest event and the most anticipated occasion in the festival calendar. Each year up to 500 events take place around the city during this five-day spectacular. Human towers – known as castells – are formed in the Gothic quarter, which has many people clambering on top of one another to form a human monument which could rival the tallness of some of Barcelona’s buildings. Make sure not to miss Correfoc in the evening. Here, fire-breathing dragons bring fireworks and big bangs to the streets of Via Laietana, in one of the most beloved processions at this festival. 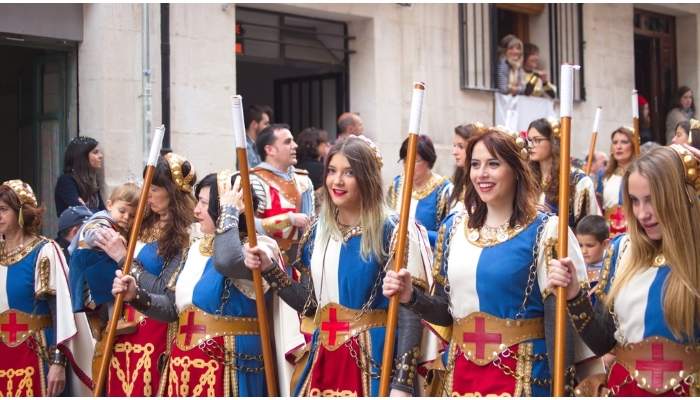 Closing Spain’s festival schedule with a bang – Els Enfarinats yokes eggs and absurdity together in this final fiesta. In remembrance of King Herod’s biblical Massacre of the Innocents, the village of Albi in Alicante puts on a mock coup d’etat using flour bombs, fireworks, and eggs. Traditional Spanish military uniforms are adorned whilst a big floury mess is made of the village, as it’s pummelled between the villagers. The battle is between the Els Enfarinats (The Floured Ones) and La Oposicio (The Opposition), who launch over 1,500 eggs and hundreds of kilograms of flour at one another.