Famous Faces: The Stories Behind The Most Famous Statues In The World

Helen of Troy’s face is said to have launched a thousand ships thanks to her great beauty, but what about other famous faces around the world? The revelation that the Rapa Nui (Easter Island) heads have bodies buried beneath the surface has changed all the theories about why they were made, and there are plenty of other stories that go alongside the rich history of statues. Read on to discover which famous face you could check out on your next trip! 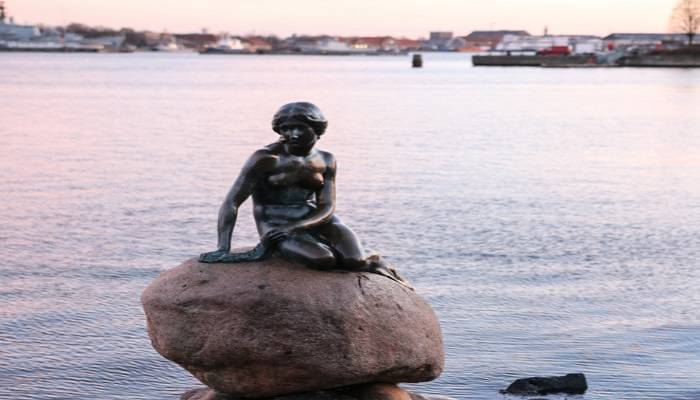 Inspired by Hans Christian Andersen’s classic fairytale, this pretty, bronze lady sits on a rock along the Langelinie promenade in charming Copenhagen. Carl Jacobsen – of Carlsberg brewery fame – was so taken with a ballet performance of the classic story that he commissioned the statue as a gift to the city. He asked ballerina Ellen Price to be the model for the sculpture, but she refused to pose nude for sculptor Edvard Eriksen. Consequently, the statue melds Ellen’s lovely face with the body of Eriksen’s wife Eline. The figure has become something of an emblem of the city, and as such has attracted protestors wishing to make an impact: one of the most recent protests involved red paint being thrown over the statue in objection to Denmark’s complicity in whaling in the Faroe Islands. This isn’t the most striking incident, though: the poor mermaid has also been decapitated – twice! 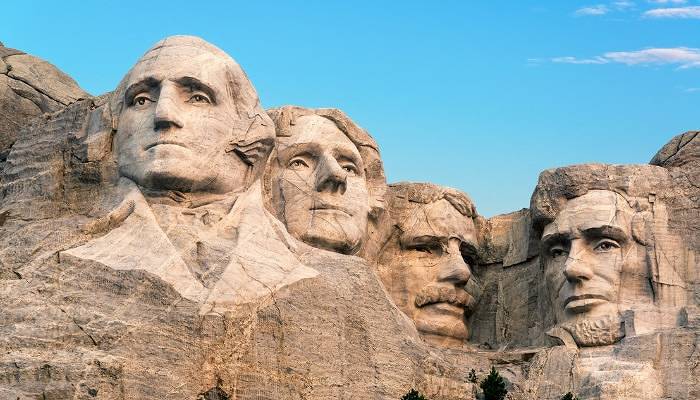 From charming children’s tales to some decidedly more serious faces – carved into Mount Rushmore in the Black Hills in Keystone, South Dakota, are four iconic American presidents, representing the first 130 years of the United States. We say carved, but blasted would be a more accurate term, as the eminent visages were created using dynamite. Incredibly, no one died during construction, which took 14 years and was completed on October 31st, 1941. If you visit, you’ll be able to spot George Washington, Thomas Jefferson, Theodore Roosevelt, and Abraham Lincoln, in that order. The faces were constructed in order to boost tourism in South Dakota, which worked remarkably well – it’s now one of the most recognisable scenes in America. Don’t know anyone who wants to visit the States with you? Not to worry, as George Washington said: “It is better to be alone than in bad company”. 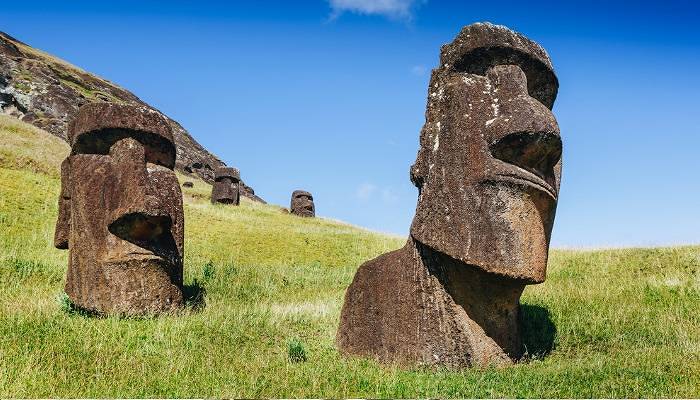 While the American presidents might be lacking bodies, the same can’t be said for the giant Moai heads on the Pacific Island of Rapa Nui, or Easter Island. Contrary to popular history, the heads were recently discovered to be attached to enormous bodies that were buried beneath the surface of the Earth, prompting a re-evaluation of everything we thought we knew about them. Initial theories drew on the fact that the island, when found again, was entirely deserted aside from these eerie heads, all of which faced inwards in a circle along the coastline. They suggested that the various tribes on the island had competed to create the biggest and best statue to honour the gods, and in doing so, used up the land’s natural resources to build and transport the heads, causing either a mass famine or mass evacuation. Now that we know there are bodies beneath the surface, it has been proved likely that small teams of people could ‘walk’ them along the ground using just a few ropes. There’s also evidence that the tribes, far from being in competition, shared their resources – the heads now appear to be a tribute to some kind of island deity, contributed to by all the various tribes. Why the people then disappeared is still a mystery, although one theory reckons rats and European contact are to blame. The island is populated again now – around 5,000 people live there, thriving on the tourism that these fantastic statues generate. 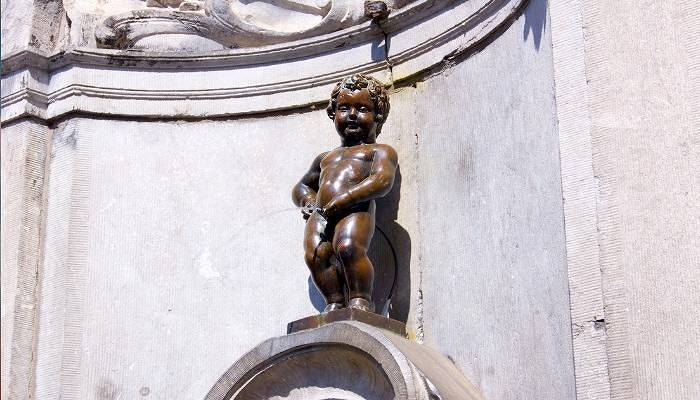 Swooping from the grand and impressive straight to the tongue-in-cheek, we find ourselves in the Belgian capital of Brussels. Known for its charming cobbled streets and scenic canals, the city also has a sense of humour: this little statue depicts a naked boy peeing into the fountain and is one of the best-known symbols of Brussels. Originally made around 1619, the statue has been stolen, bombed, and dehydrated through the years, and the version that now rests above the fountain is in fact a copy, made in 1965. Legend has it that it references a baby lord, whose troops hung him from a tree in a basket while at war, to encourage them. From his vantage point, the young noble widdled on the enemy, eventually causing them to lose. Another tale argues that a small boy was able to put out a fire with his pee, and yet another has him extinguishing the fuses of explosives placed along the city walls. The statue has been dressed in various costumes throughout its life, from a judo uniform to Dracula’s iconic cape, and he remains greatly loved by Brussels’ inhabitants. 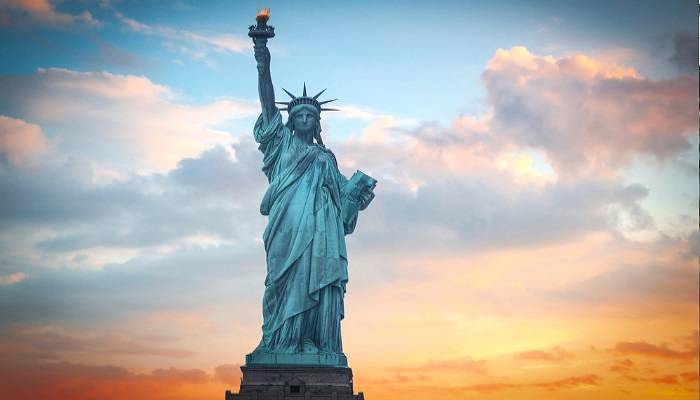 Formally known as ‘Liberty Enlightening the World’, the huge green lady watches over New York’s harbour and is said to be the first thing seen by immigrants arriving by boat to the city. She holds a torch aloft – rerpresenting her lighting up the world – and strides out of chains, the tablet in her arms inscribed with ‘July, IV, MDCCLXXVI’ (July 4th, 1776): the date of the American Declaration of Independence. This symbol of America was in fact made in France and given to the Americans as a gesture of friendship. The metal was designed and built by Gustave Eiffel, whose incredible tower still stands in Paris. It’s not often you can claim to have built two iconic landmarks! Lady Liberty’s Roman heritage can be clearly seen in her features, and her crown forms a halo around her head; the seven spikes represent the sun, the seven seas, and the seven continents, further demonstrating her commitment to lighting the path to knowledge. Nowadays, she’s a popular draw for visitors to New York, and can be seen well from the island of Manhattan or the Staten Island Ferry. It is also possible to take a trip to Liberty Island itself, and experience the sheer size of her imposing figure. 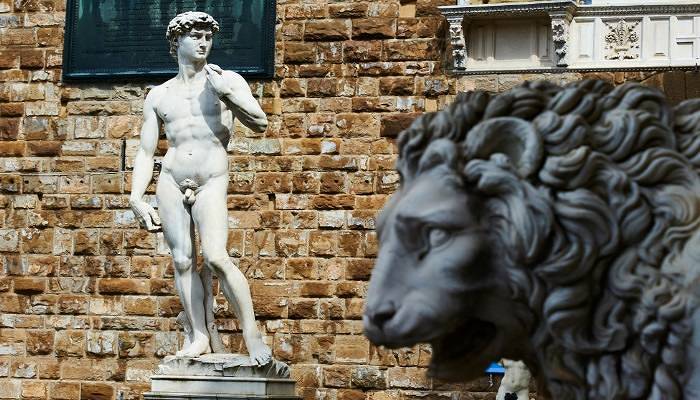 He may be incredibly muscly, but poor David is significantly lacking in one fairly obvious area. The naked statue originally stood in the Piazza della Signoria, outside the Palazzo Vecchio in Florence, and has inspired countless souvenir aprons, bottle openers and fridge magnets. The original was eventually moved inside, to the Accademia Gallery in Florence, and a replica placed in the square to avoid damage. Michelangelo, only 26 at the time, sculpted the figure so impressively well that it even has veins in the hands, demonstrating David’s tension just before he fights Goliath. And the rather underwhelming male organ? In classical civilisations, large penises were associated with foolishness and lust, and small ones with wisdom, intellect and civility. Michelangelo’s David therefore depicts the ideal Classical man: smart and strong enough to defeat a giant. There is another theory, though: it’s been suggested that, alongside the tension in his arms and fear in his face, David’s lack of erection is due to his fear. He is about to take on Goliath, after all! 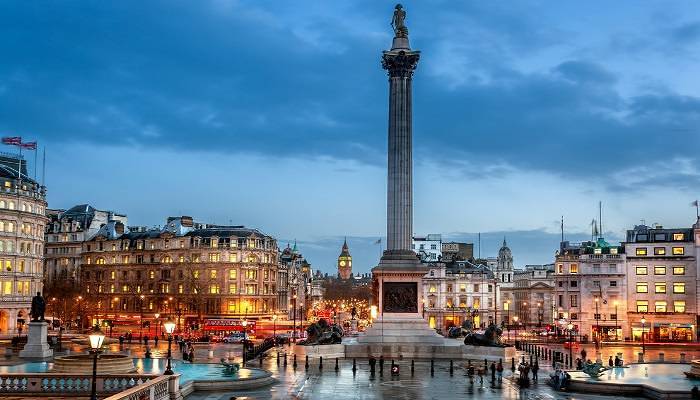 We couldn’t forget about our very own famous face: Nelson’s Column in Trafalgar Square, London, draws visitors in their thousands. Admiral Horatio Nelson looks down on them all from a towering 170ft. While we’d be getting vertigo, the brave Admiral looks towards Westminster to demonstrate his allegiance to the country. His leadership was much admired, and his courage in the several battles he fought during his life earned him significant respect. It’s said that King George III wept when he heard of his death, but it’s not only Englishmen who admire the statue: apparently, Hitler had designs to relocate it to Berlin if his plan to invade Britain was successful. Thankfully, it wasn’t, and we’re still in possession of the towering figure today. It has since been used for a number of protests, the first in 1979 – Ed Drummond climbed the column to demonstrate against apartheid. It seems that Nelson’s spirit of fairness has echoed through the years!

Planning a trip to see one of these famous faces? Check out our Holidays | Flights | Hotels