If I Live To See The Seven Wonders

The list detailing the Seven Wonders of the Ancient World was laid out by Philo of Byzantium, way back in 250BC. This renowned collection of marvels included the Hanging Gardens of Babylon and the Pyramids of Giza, the only wonder to still be with us in 2020.

The Seven Wonders of the Modern World were chosen via an international contest in 2007, hosted by New 7 Wonders Foundation. Millions of people voted and the resulting winners, all of which are UNESCO World Heritage sites, are now amongst the most-visited destinations in the world.

Spanning four continents and showcasing the vast achievements of ancient, medieval and recent empires, these modern wonders transcend age, race, culture and belief in their intrigue. 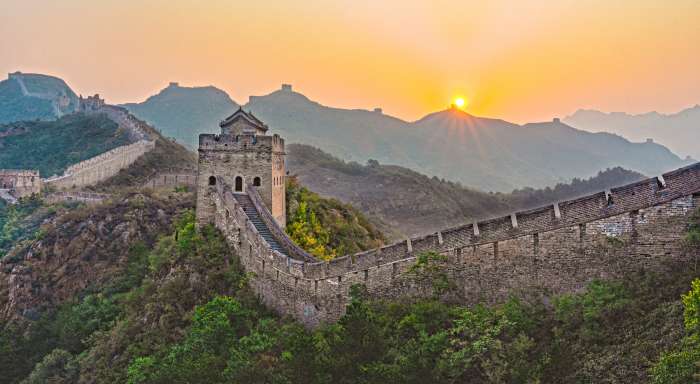 Did you know that the Great Wall was built over 1800 years? Quite frankly, it’s no surprise when you consider that the average width of the wall is around six metres, and estimated to be over 13,170 miles long. That’s a lot of bricks. It was also built to mimic the natural defences of the landscape, so you’ll find the wall rising and falling with the lay of the land. The vast majority of the huge defence mechanism was built under the Ming Dynasty, and the swathes of wall from this period are amongst the most popular to visit.

Fun fact: Despite claims to the contrary, the Great Wall can’t actually be seen from space. The rumour began over two centuries before humans had even taken to the inky black skies, but astronauts (including Neil Armstrong himself!) state that it’s not visible from beyond low orbit.

When to visit: Spring (April to May) and autumn (September to November) are considered the best times to visit, thanks to a kinder climate and fewer crowds. Travellers are discouraged from visiting during the summer, when sweltering summer temperatures are exacerbated by the sheer number of people in the most popular sections. 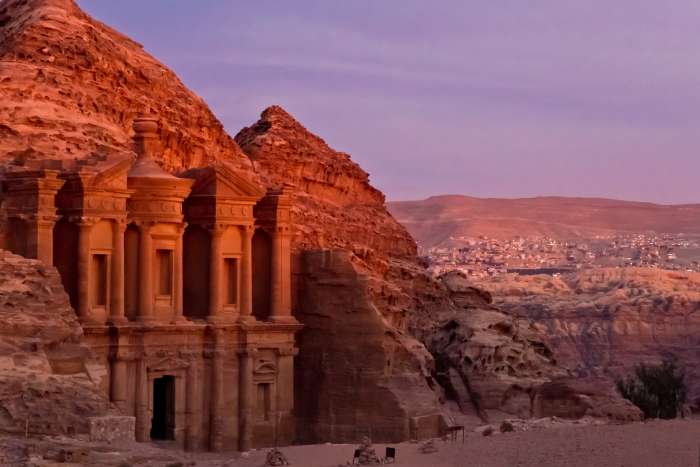 You’d be forgiven for believing that Petra solely comprises of The Treasury, the ornate structure hewn into a dusky pink cliff face. However, Petra is actually a sprawling complex, featuring numerous ancient edifices such as temples, monuments and tombs. Scriptures from antiquity suggest that the area was selected as a settlement thanks to the natural, fort-like structure of the valley, watered by a perennial stream – a huge draw for communities as far back as 7000BC. Today, you can wander the impressive network of walkways and structures at your leisure, although getting to the site early is certainly recommended as it’s larger than you think!

Fun fact: Does The Treasury look familiar? That’s because it’s been featured in numerous films through the years – perhaps most notably in Indiana Jones and the Last Crusade when rugged explorer Jones (Harrison Ford) saves his dad (Sean Connery) from certain doom. Spoiler!

When to visit: During the day, Petra can be fairly busy (and hot!). Why not come back in the evening for the spectacular Petra by Night experience instead? Every Monday, Wednesday and Thursday night, the walkway from the visitor centre to The Treasury is illuminated with 1500 candles, offering visitors the chance to see the ancient kingdom in a whole new light. 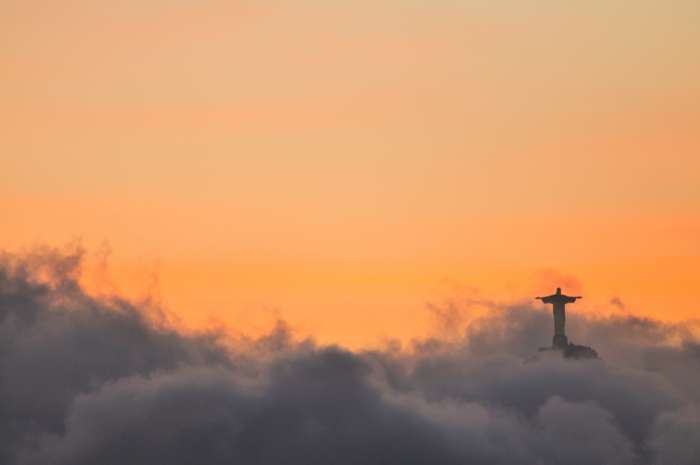 Standing at 30 metres and weighing in at 635 tonnes, Christ the Redeemer is the modern addition to the world wonders list, having only been completed in 1931. It appears, however, that the idea to build a towering religious symbol came about 10 years before, when representatives of the Brazilian Republic felt that the people needed a symbol to reignite their faith after World War One. Today, the statue is easily accessible via the popular cog train, which runs through the lush Atlantic Forest and almost to the summit of Corcovado Mountain. Whether you believe or not, it’s definitely worth a visit.

Fun fact: Due to the statue’s position atop a mountain, it’s frequently struck by lightning! Just prior to the FIFA World Cup in 2014, a lightning strike broke one of the edifice’s thumbs. An act of God?

When to visit: Christ the Redeemer is one of the must-sees in Rio de Janeiro, so expect crowds whenever you visit. Quieter months include September and October, but you’ll probably still encounter groups on pilgrimages during these periods.

The precise former use of this mountain-top citadel remains a mystery, but the ancient ruins (all of which were painstakingly built without the use of mortar) play cleverly upon astronomical alignments, indicated through runes, and the stunning panoramic views of the Sacred Valley. Similarly, it’s not known why the site was abandoned so suddenly circa 1572, but this mesmerising location is considered one of the jewels of the Incan Empire. The hike up there may be tiring, but we promise it’s worth it at the top. Please get a selfie with an alpaca for us?

Fun fact: Around the site, you’ll find numerous indigenous communities who still speak the ancient language of Quechua. The Quechuan people long preceded the Incan Empire, so many of their sites have local translations: Machu Picchu translates to ‘Old Mountain’ or ‘Old Peak’.

When to visit: February is probably the quietest time to visit, but with good cause – it’s the wettest month of the year and the famous Inca Trail is closed. April to May is considered a good time to visit, but June is when the locals descend to celebrate the Festival of the Sun, so why not stop by then for a truly unique experience? 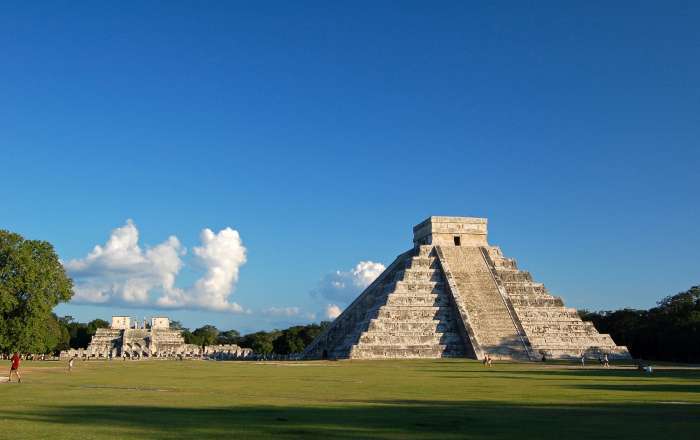 Another ancient site that was abandoned without a clear reason, Chichen Itza showcases outstanding examples of Mayan archaeology, with the remarkable Pyramid of Kukulcan at the centre. This imposing edifice has 365 steps, one for each day of the year, with the platform at the very top representing the 365th day. A vast complex, measuring approximately six square miles, you’ll find multiple stone structures littering the area, as well as the beautiful Cenote Sagrado, believed to have once been used as a sacrificial site for Chaac, the Mayan rain god.

Fun fact: During the spring and autumn equinoxes, sunrays create unique shadow patterns across the Kukulkan Pyramid, giving the appearance of a snake wiggling down the staircase.

When to visit: The dry season, from November through to April, is perhaps the best time to come along. However, as the site is the most popular spot to visit in the whole Yucatan Peninsula, you’re likely to find crowds throughout the year. 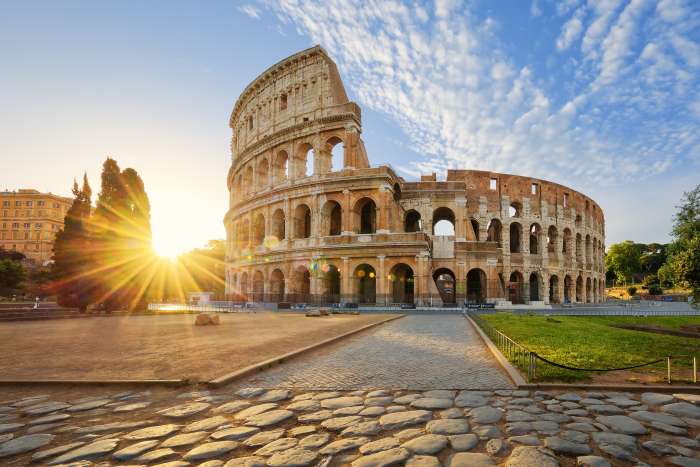 One of the most iconic structures in the world, the Colosseum is a ubiquitous symbol of the strength of the Roman Empire. In 2018, it became the most popular tourist attraction on the planet, with 7.4 million visitors flocking to the amphitheatre. Construction began under Emperor Vespasian and was completed during the reign of his heir, Titus. As its height, the Colosseum could hold up to 80,000 spectators, who came to watch gladiatorial matches, executions and dramas based on classic mythology. Are you not entertained?

Fun fact:  Before there was a permanent basement, the arena floor could be flooded with around three feet of water supplied by a nearby aqueduct. The ‘artificial seas’ within the Colosseum were then used to stage ocean battles – how’s that for entertainment?

When to visit: Being one of the undoubted highlights of any trip to Rome, you’ll always find crowds here. However, midweek visits first thing in the morning or last thing in the afternoon can be quieter. 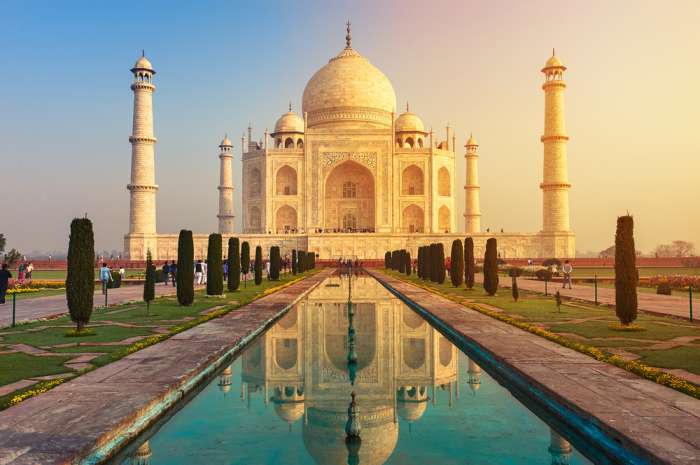 Over 20,000 artisans worked tirelessly to create the Taj Mahal, an intricate mausoleum built to house the body of Emperor Shah Jahan’s favourite wife. Acting as the centrepiece of a 42-acre complex, it was sculpted from white marble, and is considered one of the finest examples of Mughal architecture in the world. Although it is undoubtedly impressive today, it was once even more beautiful, thanks to hundreds of semi-precious jewels inlaid into the walls – unfortunately, British soldiers looted the site in the 19th century. You know what they say about Brits abroad…

Fun fact: There’s a rumour the Emperor had the hands of all the labourers and craftsmen cut off so that no one could ever build a structure to rival the Taj Mahal, but there isn’t any evidence to support this.

When to visit: During the day, the mausoleum appears to change colour, from pink in the morning to gold in the evening. Most travellers choose to visit during the day for that iconic white look, but stopping by first or last thing can be just as magical, and less busy.

The Seven Wonders of the Ancient World

The last of Philo of Byzantium’s original list, the Great Pyramids of Giza continue to draw hundreds of thousands from around the world every year. A complex containing three primary pyramids, a collection of subsidiary structures and the legendary Great Sphinx of Giza, it’s believed to have been constructed between 2580 and 2560BC. It’s known now that the pyramids housed the remains of the pharaohs who ruled over ancient Egypt, as well as anything they might need to navigate the afterlife – for this reason, the complex is sometimes also referred to as the Giza Necropolis. And, don’t worry, although rumours of the mummy’s curse still hang in the air, there’s no evidence that such a hex ever existed.

Fun fact: When the central pyramid was first built, it was almost 147 metres tall. Today, after thousands of years of erosion, it’s now only 139 metres.

When to visit: Looking for a blast of winter sunshine? You’re in luck – winter is the best time to visit the Pyramids of Giza, thanks to the smaller crowds and lower temperatures. Tour buses tend to clamour to the site first thing in the morning, so opt for a late morning arrival too.