Ok…that might be a bit of an exaggeration, but the USA-love is certainly reaching fever-pitch in the kitchens of some of London’s most notorious foodie hotspots. Most specifically, burgers. The humble meat and bun is taking over London, one 1500 calorie meal at a time, and here’s our rundown of the hottest, hippest, meatiest joints in town in 2012… Pitt Cue began its trade underneath a bridge by the South Bank, and garnered such a cult following that its now made of bricks and mortar. There are all sorts of delicious treats on offer at Pitt Cue; pulled pork burgers with creamy, delicious cheese and fluffy buns. Like all the new up and coming burger joints in town at the moment, you can’t book – which means queuing – but trust us when we say it’s worth it. Find them here. 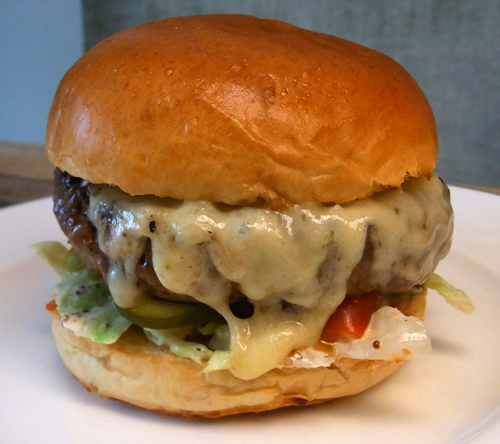 The Ad Cod is based in Chelsea, and has been made considerably more famous by Fred Smiths ridiculously creative burger designs. Fred cooks each one to order and hand assembles them himself. The cheese is made from a blend of American cheddar and Parmesan, infused with bacon and the beef is perfectly cooked. He only serves them at lunch time because he’s a stickler for quality control – and he tends to release one burger for a very short amount of time before moving onto the next creation.  Get yourself down there! Now, I’m really not one for a queue. There’s very little about a.) standing b.) standing in the cold  c.) standing in the cold for an hour that I, or indeed any human with a normal sense of right and wrong, enjoys. There has to be something pretty spectacular at the end of said queue to justify its existence. That is certainly the case at MeatLiquor. You can’t book, so you’ll just have to stand (it).

Underneath a huge old warehouse near Oxford Street,  the music is loud, the people are hip and the drinks are STRONG. Oh, and lest we forget – the burgers aren’t bad either. They serve up proper old fashioned American style grub – the Dead Hippie Burger is especially delicious! It’s quite different from Pitt Cue in that it has a real party atmosphere – it would be a perfectly viable option for an entire night out. Which explains the queues. Check them out here.

We take no responsibility for any furious glances in the mirror when the time comes to don that daring two-piece on the premise that you’d ‘lose 10lb’s by summer’. You chose which buns to work on!