A dealchecker’s Guide to Incredible Iceland!

Staring longingly at my holiday snaps, complaining about the UK weather, generally being a misery… Yup, I’m suffering from some serious holiday blues. And can you blame me? Just a few days ago I was running around Iceland in knee-deep snow, drinking my body weight in hot chocolate and searching for whales off the harbour!

But luckily, as a dealchecker, coming home from holiday doesn’t have to mean my trip is long forgotten. Instead, it will be immortalised in this blog post. Huzzah! 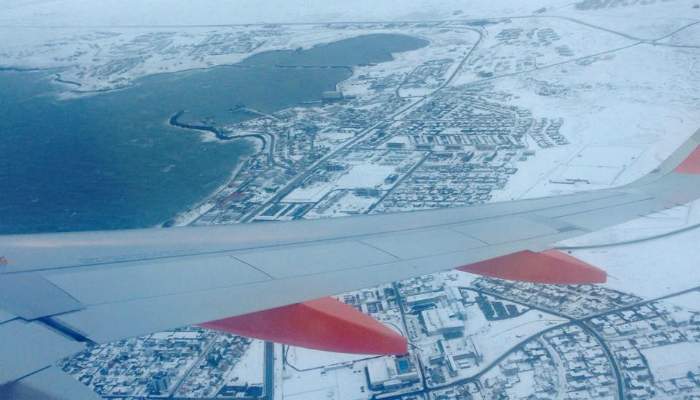 After peering out of the window seat at black beaches, dark blue sea and bleached white land for what seemed like forever, we finally touched down on Icelandic soil. Or snow, I should say. Stepping out of Keflavik airport, we were met with what I would call a blizzard, but what the Icelandic would call a mild January breeze. Luckily the airport shuttle, FlyBus, was already waiting to whisk us away to the capital, Reykjavik.

The journey to Reykjavik grew our anticipation even more, as we gazed out of the window at a landscape like no other I had ever seen before! Thick white snow spread as far as the eye could see, littered with bumps of jet black lava jutting out of the ground. Strange figures on the horizon punctuated the drive; seemingly human outlines made of black stones piled high on top of one another. I was later told that these figures are meant to represent trolls, which are a big part of Icelandic folklore, said to eat men who get lost in the snow. 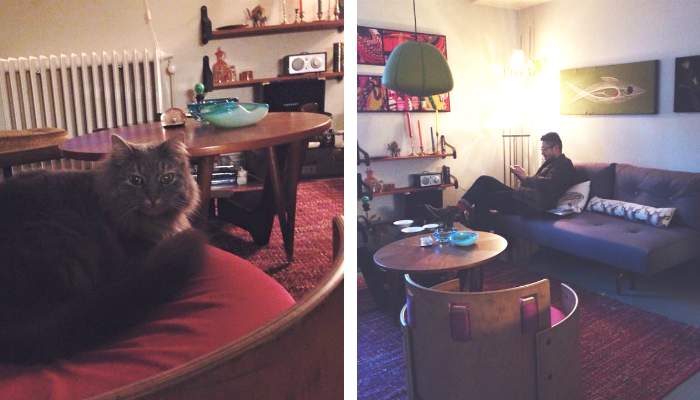 After a comfortable 45-minute transfer we arrived at our apartment on Lindagarta, which we were more than pleased with. Before we had even unpacked there was a meow at our window and a big fluffy cat appeared. As it was so cold outside we let her inside straight away, and as she made herself right at home we realised she must have belonged to the landlord upstairs. There appears to be a surplus of super cute and friendly cats in Reykjavik, all the better for a cat lady like myself.

Our apartment was just two streets away from the main hub of the city on Laugavegur, where most of the bars, shops and restaurants are, and a short five-minute walk to the coast and the Sun Voyager sculpture; a stainless steel boat representing hope and progress. 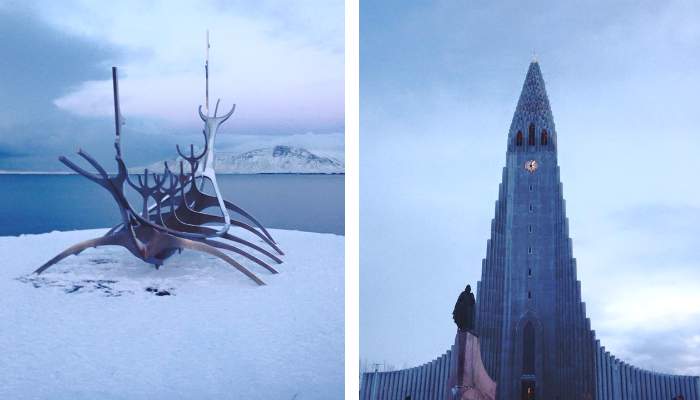 There’s so much to do and see in Iceland, from hunting down the Northern Lights and exploding geysers to horseback riding and snowmobiling! So before we set off on our trip we booked three excursions to help us make the most of our time in Reykjavik.

The first tour set us off in search of the Northern Lights, heading out of Reykjavik at 9.30pm towards the eastern coast. Our destination was a small cabin on top of a hill beside a black beach which was covered in fresh snow. It was quite a cloudy and windy evening and we were warned to stay away from the water as the sea was crashing angrily. We went indoors to get a hot chocolate and reluctantly accepted that we weren’t going to see anything that night. Soon enough we were being piled back onto our coach and heading back home, or so we thought.

Without warning the coach stopped at the side of the road – the driver had spotted some stars, a good sign for clear skies – and jumped off into the snow again. After 10 minutes of watching and waiting, two pale stripes appeared in the sky. As we moved further towards them they grew stronger until they were a bright green. By that time many other cars and coaches had pulled up in the same spot and there were around a hundred people running towards the lights, trying to take pictures and cheering. We nearly froze stiff and only got home at about 3am, but it was worth it. 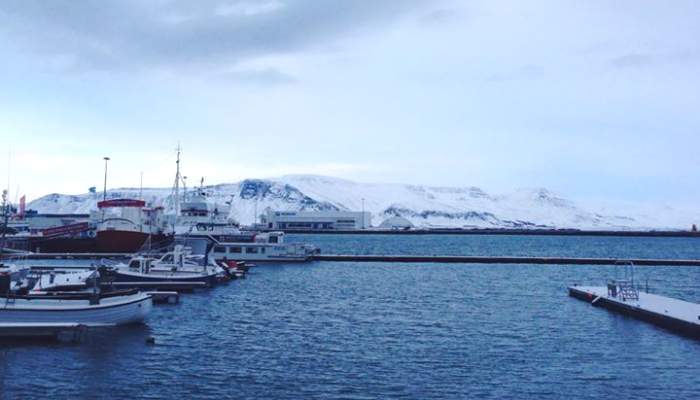 The following day we went whale watching, another test of my stamina against the cold. When we saw the boat, the upper decks were both covered in snow – I should have taken this as a sign. Nevertheless we boarded and set out to sea. The water was choppy so we sat outside with a hot chocolate and enjoyed the gorgeous vistas of white mountains and bright pink skies. As time went on the chances of us seeing any whales grew less and less likely, and we grew colder; colder than I have ever been in my entire life.

We retreated down stairs and tried to huddle for warmth around more hot drinks, giving up hope of seeing anything than a few sea birds. After thawing slightly we plucked up the moxy to try our luck outside once more, and not long after we spotted some small black fins in the water. There were about eight porpoises jumping around the front of the boat! It was pretty amazing to see them swimming around in their natural habitat, and for a short while the cold didn’t seem so bad. 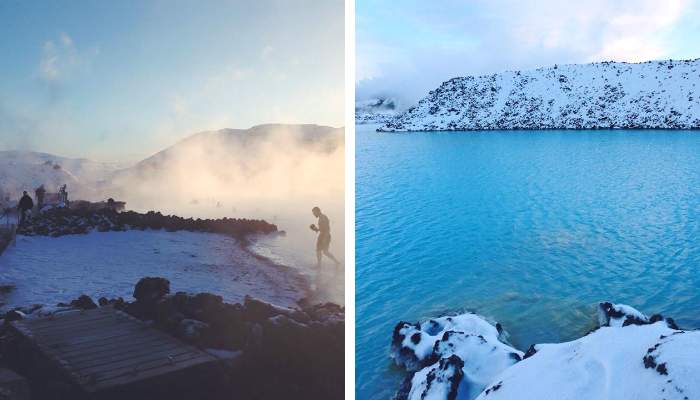 By now we had been in Reykjavik for a while and it was, sadly, almost time for us to go home. For our final hurrah we decided to visit the Blue Lagoon, a geothermal spa and bath located in a lava field in the middle of the Reykjanes Peninsula. The landscape is really breathtaking, as the steam rises into the air, past the bright sun and above snow white mountains.

The warm waters are rich in minerals like silica, which turn the water a pretty milky blue and have great benefits for the skin. The water temperature of the lagoon averages 37–39 °C, which was a crazy contrast against the -2°C air. It was actually quite fun to jump out of the pool, get ridiculously cold and then plunge back into the steamy water! After a three-hour soak we were relaxed enough to make our way back, snoozing along the way. 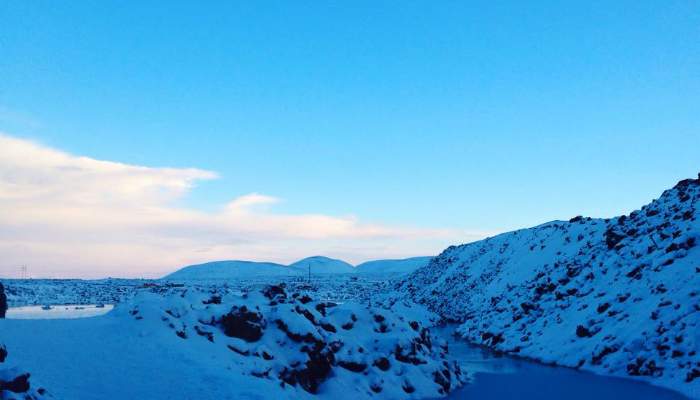 But this trip wasn’t all activity and adventure! We also indulged far too much in delicious Icelandic food and drink. In such chilly conditions you have to adjust your drinking habits accordingly, so we paid a visit to the Dillon whiskey bar and then moved on to White Russians at the Lebowski Bar which is themed around the film The Big Lebowski. Food was often amazing seafood, from Torfan and Sjávargrillið which I couldn’t reccomend more.

While we were looking around for restaurants we noticed that a lot of places were offering whale, puffin and shark on their menus, which the whale waching team informed us isn’t part of Icelanders’ typical diet. These restaurants cater towards tourists who think this is traditional Icelandic fare, so if tourists stopped ordering these items the demand to hunt these animals would fall and you might save a few whales. And besides, the non-endangered food we ate was more than delicious enough.

And so, now I’m back at home. I honestly loved my short time in Iceland, every moment of it, and can’t seem to find anyone else who has visited to disagree. It’s an amazing country and I can’t wait to return (perhaps in the summer when it isn’t quite as cold).